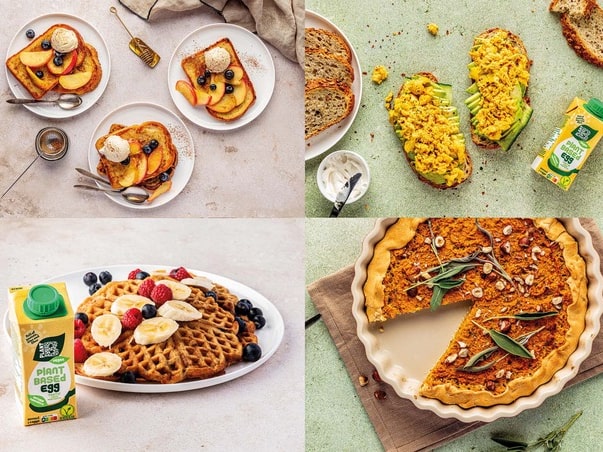 PLANT B is set to launch a plant-based liquid egg alternative based on sweet lupin across Germany. The Hamburg-based food tech claims its new cruelty-free egg product offers the same functionality as conventional chicken egg but with 50% fewer calories.

After 15 months of product development to mimic the complicated structure of a conventional chicken egg, PLANT B Egg will go on sale as a ready-to-cook fresh product in April 2022. The product is a 100% plant-based alternative for scrambled eggs, cakes, waffles, or quiches and is aimed at health-conscious flexitarians and vegans alike. The launch comes as a new survey reveals that German consumers are buying plant-based eggs due to animal welfare concerns.

Lupin is fast growing in popularity as a plant-based food ingredient, with startups like PLANT B and fellow food tech Prolupin championing the sustainable legume. UK plant-based producer Better Nature has launched alt meat products made with fermented lupin, while most recently plant-based nutrition company Mikuna has launched lupin-derived protein powder that is already outselling pea and soy protein.

While PLANT B has claimed its innovative new egg product will be the “world’s only vegan liquid egg alternative made from lupins”, Canadian plant-based company Nabati last year launched a liquid alt egg made with lupins and pea protein.

“We mimicked the chicken egg with only seven natural ingredients using state-of-the-art technologies. The special feature: Whether for large kitchens or the home stove – the versatile application possibilities offer limitless options in cooking and baking: spaghetti carbonara, vegetable quiche, muffins, or cakes – the PLANT B Egg offers numerous vegan possibilities that also convince in taste,” commented Thomas Starz, founder and CEO of PLANT B.