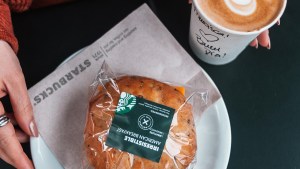 There’s been big news in the plant-based food world this week, including Starbucks’ partnership with NotCo and a vegan chicken burger debut in India.

Global giant Cadbury even apologized for the time it took to unveil its first vegan chocolate bar, upon announcing the news it’s launching The Cadbury Plant Bar.

As well as these leading brands, more plant-based goodies are cropping up over the world like never before.

Here’s our latest roundup on what’s on offer.

Starbucks to add NotCo products to its Chile stores

Now, the brand’s plant-based milk and beef alternatives will be available at more than 130 locations across the country.

NotCo’s co-founder and CEO Matias Muchnick told the outlet the country provides a ‘good experimental test market’. If it does, well, they added, the US ‘can pick it up’.

Burgrill, one of India’s leading burger chains, has debuted one of the country’s first plant-based chicken burgers on its menus.

This is in partnership with Greenest Foods, Green Queen reports.

The Green Meat Pounder, which includes the soy-based patty, is coming to the chain’s 30 outlets across 15 cities.

Co-founder Shreh Madan is reportedly ‘thrilled’ to introduce the vegan burger, and that it’s been a year in the works.

This month, the company is launching its latest Plant-Powered Superfood Porridge, in Fragrant Papaya Chia & Lentil Dahl with Coconut & Moringa.

HOWND only launched this year with ethics being its core focus.

Moreover, it uses 100% vegan ingredients and says it’s vet-approved. Jo Amit, the company’s co-founder told PBN: “HOWND is completely focussed on maintaining optimal health. And, wellbeing in dogs while avoiding harm to other animals and the planet, and our customers share this passion.

“Since the launch of our plant-powered dog food in February, we’ve built up a loyal pack of dogs who are thriving on our first Pumpkin Casserole recipe – be it a healthier coat, happier tummy, or getting back to their optimum weight.

“As such, we’re very encouraged to continue our efforts to help more dogs unleash their inner healthy, happy HOWND.”

Start-up, MeliBio is tackling the environmental and ethical issues behind honey production by producing a plant-based alternative dubbed to taste like the ‘real’ thing.

It came after ‘extensive’ research and development, and CEO Darko Mandich said: “Honey is an ingredient found in every product category, from food to beverage and personal care products. For which, MeliBio is now providing a plant-based option.

‘By bringing delicious, nutritious and real honey made without bees to the market, we are shaping our present and future in a way that is better for bees and for humans.’

The company debuted its plant-based honey at an event in Berkeley, California this week.

The post From Starbucks To Porridge For Dogs, 4 Plant-Based Food Releases You Can’t Miss appeared first on Plant Based News.