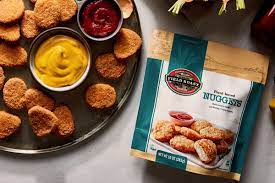 CHICAGO–Greenleaf Foods, SPC, owner of leading plant-based brands Lightlife® (“Lightlife”) and Field Roast (“Field Roast”), announced today that its Field Roast Plant-Based Nuggets are now available at more than 50 Costco locations in the Los Angeles region, marking the first time the product will be sold at any Costco store in the United States. “We’re excited about Field Roast’s continued growth with Costco and the opportunity to make delicious plant-based food more accessible to home chefs everywhere,” said Dan Curtin, President of Greenleaf Foods, SPC. “The Field Roast Plant-Based Nugget is the only plant-based chicken nugget alternative available at Costco LA.” Field Roast first introduced its Plant-Based Nuggets to conventional retailers in January 2020 and has since consistently outperformed other plant-based nuggets in the space,1 selling nearly 1.75 million plant-based nuggets in the last 12 months. The Field Roast Plant-Based Nugget at Costco offers a new-and-improved formula that utilizes several relevant food technologies including high moisture extrusion (HME) technology to better deliver on consumers’ expectations and contains twice as many nuggets as the regular retail pack. “We designed a plant-based nugget specifically for the club channel that offers improvements in taste, texture and color,” said Jitendra Sagili, Chief R&D and Food Technology Officer at Greenleaf Foods, SPC. “This Field Roast Plant-Based Nugget provides a more fibrous texture and delivers an eating experience that will leave you and your kids begging for more.” Field Roast Plant-Based Nuggets are golden, tender, and crafted using whole foods like roasted garlic, paprika, wheat and pea protein. The crispy, bite-size nuggets offer 10 grams of protein per serving and are part of the brand’s growing frozen portfolio. In the last 12 months, the Field Roast brand has seen tremendous growth in the U.S., introducing nearly 10 new products and gaining distribution at more than 5,500 retailers throughout North America. Its portfolio of high-quality plant-based sausages, burgers, roasts, appetizers and entrees and its leading Chao Creamery dairy-free cheese products are crafted for those who want to discover, indulge and share in bold taste experiences. For more information on Field Roast, visit fieldroast.com and follow @FieldRoast on Facebook, Twitter and Instagram. ABOUT GREENLEAF FOODS, SPC Greenleaf Foods, SPC, is transforming plant-based protein with a wide array of delicious and innovative products that satisfy consumers interested in adding protein variety to their diets. Our leading brands include Lightlife® (“Lightlife”) and Field Roast (“Field Roast”). Together, these brands are delighting loyal, longtime fans and enticing new ones who never knew plant-based protein could taste so good. The Lightlife and Field Roast portfolios feature nearly 50 products and represent a leading market position in the refrigerated, plant-based protein category in the U.S. Greenleaf Foods, SPC is a wholly owned, independent subsidiary of Maple Leaf Foods Inc. (TSX:MFI).