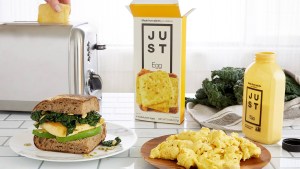 Food-tech brand Eat Just aims to launch its vegan egg alternative across Europe by the end of 2021.

When asked about plans to launch JUST Egg in Europe, he said: “We’re in the process of working with regulators and we are optimistic that we will be launching until the end of the year.

“Our goal [is] to be the most consumed egg in the world. It is more healthy, you don’t need the chicken.

“In order to eat an animal, you need to slaughter, you need to use antibiotics, you need to tear down the rainforest. Or maybe this used to be the case, it’s not anymore.”

No further details have been revealed.

Earlier this year, Eat Just announced it had sold the equivalent of 100 million chicken eggs.

The company celebrated the landmark achievement on Twitter, where it described itself as ‘the fastest-growing egg brand in the US’.

It added: “This is a major milestone for us in our mission to build a better food system. We’re incredibly grateful that you’ve been a part of getting us here.”

The announcement shortly follows a recent finance round, where Eat Just secured a staggering $200 million.

The money will be used to build capacity for Eat Just’s pioneering products. It will also help accelerate research and build its brands in ‘key international markets’.

The post Eat Just Plans To Launch Vegan Egg In Europe By End Of Year appeared first on Plant Based News.