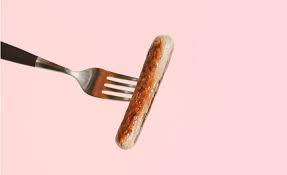 The products were developed using a single cell sample. They were designed to satisfy appetites for meat “without harming the environment or animals in the process.” Meatable claims that its sausages are the product of years of development. Steps have been taken to accurately recreate conventional pork’s structure, texture, and taste. They even produce a recognizable, pork-like “signature sizzle in the pan.” “This is a truly exciting moment for the entire Meatable team. To be able to see and cook our sausages for the first time was an incredible experience especially as my co-founder Daan and I were able to finally have our first taste,” Krijn de Nood, co-founder and CEO of Meatable said in a statement. He continued: “This was particularly exhilarating as we know that all of our hard work over the past four years has been successful in creating a real meat sausage that is indistinguishable from traditional pork sausages.” The sausages do not contain fetal bovine serum. The widely used animal cell culture speeds up the growth of animal tissue. It is harvested by puncturing the hearts of bovine fetuses within pregnant cows while they are being slaughtered and raises serious ethical concerns within the cultivated sector.

The environmental benefits of cultivated sausages

Meatable’s sausages take just weeks to “grow” in the lab. This, it claims, demonstrates the potential for usurping traditional animal agriculture and reducing the meat industry’s emissions by up to 92 percent. According to the United Nations, animal agriculture is responsible for up to 14.5 percent of global greenhouse gas emissions. A shift to plant-based diets is recommended by numerous experts. Both for personal and planetary health benefits. However, cultivated meat is touted as a best-of-both-worlds compromise for people that don’t want to stop eating meat altogether. “This will ensure that people can experience that this isn’t just like meat, it is meat – 100% delicious meat, identical on every level, but without any of the drawbacks,” Daan Luining, co-founder and CTO of Meatable said. “This is one step on our journey to creating the new natural meat and I’m looking forward to seeing how the product develops before we can bring it to consumers in the next few years,” he concluded.

Singapore remains the only country in the world to approve any cultivated meat products for sale. To date, it has extended one company, Just Eat, permission to sell two cultivated chicken products. Earlier this year, the Netherlands passed a motion allowing for the sampling of cultured meat products. Meatable hopes to have the green light to sell to consumers by 2025. The post Dutch Food Tech Company Meatable Unveils Its First Cultivated Pork Sausages appeared first on Plant Based News. plant-based plant based cultured meat meatable meat chicken pork sausage cultured industry