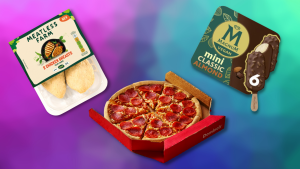 We are almost a full week into Veganuary 2022. For those of you trying it out for the first time, congratulations on your journey so far. And for our valiant returners, you’ll be happier than ever to see even more big brands extending their plant-based offerings so far this year.

This year, we’re seeing some stellar launches from the likes of Domino’s, Meatless Farm, Magnum, and Chipotle.

Tastebuds at the ready, here are some of our favorite vegan launches from Veganuary 2022 thus far.

Just yesterday, the company dropped its PepperoNAY pizza, served with a vegan-friendly version of Domino’s much loved Garlic & Herb dip.

Now, the latest creation joins the Vegan Margherita, The Chick-Ain’t, and Vegan Vegi Supreme in the firm’s plant-based treats.

Boursin’s dairy-free alternative expands in US

When the news broke that Boursin would be making a plant-based version of one of its iconic creamy cheese products, vegans worldwide were understandably thrilled.

And now, they’ve been spotted in Costo stores across the US in extra-large 15-ounce tubs.

You can also find them in Albertson’s Acme & East, Certco, Hannahord, HEB, Hyvee, Kroger, and Sprout.

(We think it’s unlikely that a larger tub will last you through the next three weeks of Veganuary because it is so delicious.)

Additionally, in the UK they’re available at Sainsbury’s.

American fast-casual restaurant chain Chipotle Mexican Grill is “thrilled” to announce the launch of its Plant-Based Chorizo across its 2,700 locations in the US.

It’s described as containing the “deep” flavor of the real thing, only made with chipotle peppers, tomato paste, smoked paprika, and pea protein.

“Plant-Based Chorizo is our best chorizo ever and proves that you don’t have to sacrifice flavor to enjoy a vegan or vegetarian protein,” according to chief marketing officer Chris Brandt.

The vegan chorizo was trialed last year. Now, it is available in three new Lifestyle Bowls, the Whole30, Vegetarian Bowl, and Vegan Bowl.

The lesser-known sesame-based plant-milk is witnessing large-scale US distribution.

The Planting Hope Company is bringing two of its three Hope and Sesame flavors of sesame milk to US grocery giant, Kroger. Unsweetened Original and Unsweetened Vanilla will be sold in 48 ounce refrigerated bottles.

It is Veganuary after all, so why not try a new plant-based milk alternative?

To find a stockist near you, visit Hope and Sesame’s website here

Promising to be “the first of its kind,” the new product has arrived in UK Tesco and ASDA stores this month.

The product is made with a blend of plant proteins and the company says it can be used roasted or grilled.

Founder Morten Toft Bech said in a statement: “Our first move into the white meat market is one of our most exciting yet and looks set to provide a viable meat alternative to more people than ever before.

“We can’t wait to hear customer feedback and see people cooking recipes and enjoying a Sunday roast without compromise!”

Customers can find them in-store or online for £3.50 per pack of two.

Here, the brand’s vegan chicken is served inside two soft corn tortillas with a sweet hibiscus and smoky chipotle salsa.

From January 9, the company will release The Chick’n & Pesto Calzone with creamy vegan mozzarella and vine-ripened Sicilian chopped tomatoes.

According to the company, the launch comes because it wanted to make plant-based diets more “inclusive” by offering “delicious taste credentials.”

Despite the cold this winter, ice-cream mammoth Magnum has launched mini versions of its vegan flavors. In a pack of six, you can find the Vegan Classic and Vegan Almond sticks.

Each is dairy-free while providing a “velvety” vanilla base and chocolate coating.

You can order yours online here, or via Sainsbury’s, Tesco, and Ocado

Caffè Nero teams up with THIS

Coffee chain Caffè Nero has joined forces with plant-based meat pioneer THIS to bring a new item to its menus for Veganuary 2022.

Two new items are arriving in stores from tomorrow, January 6, in the UK.

Customers across the nation will be able to find the new products in more than 600 sites. The former is available at £4.60, and the latter for £3.65.

THIS co-founder Andy Shovel said: “Caffè Nero is a legendary high street brand, and we’re very, very excited about our partnership. I particularly love how simple and effortless these products are.”

YO! rolls out limited-edition vegan bowl

Formerly YO! Sushi, YO! is another high-street name adding a vegan-friendly dish to customers this Veganuary.

You can also choose between a base of rice, spinach, or half and half.

From now until the end of the month, it’ll be available for £9.50 in-store or via takeaway.