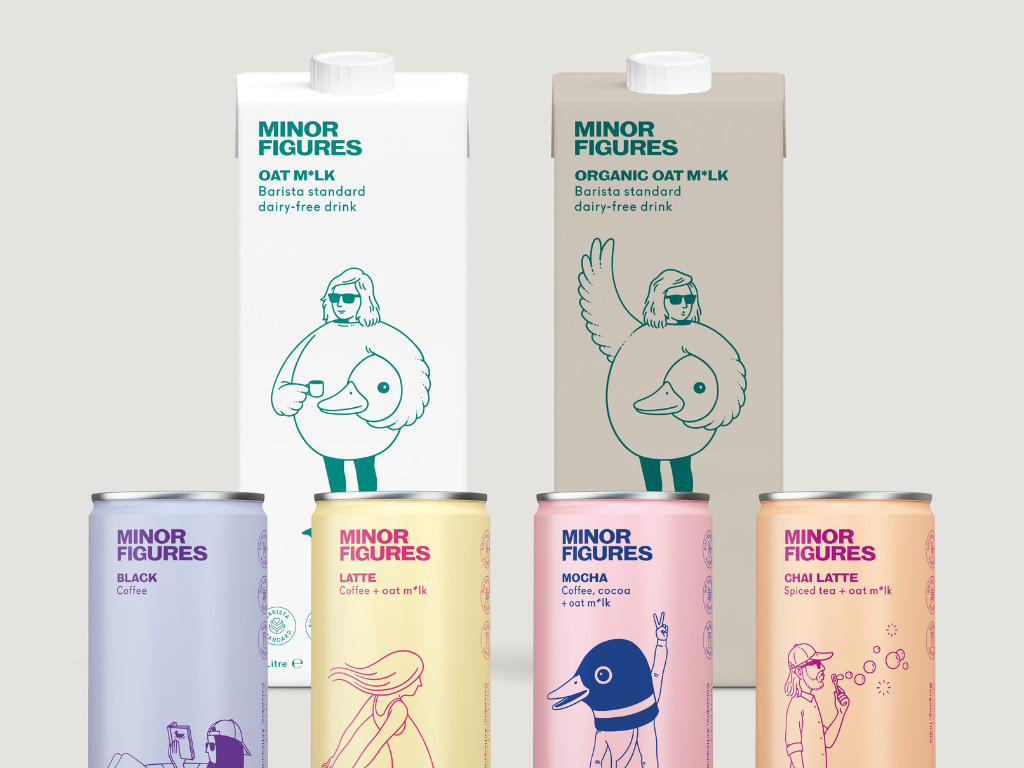 U.K.-founded Minor Figures has confirmed that both Danone, through its Manifesto Ventures investment arm, and Hong Kong’s Green Monday have invested in its operation. The oat milk startup was founded in 2015 to supply barista-quality milk to coffee shops and retail consumers alike. It has since expanded into canned ready-to-drink coffee and tea products.

The minority undisclosed investments from Danone and Green Monday will be used to coordinate expansion for the oat milk brand. Already available in 16 countries, Minor Figures is looking to increase its presence across the globe.

“We are excited to partner with Danone Manifesto Ventures and Green Monday Group. We are confident they are the perfect partner to help us optimise and grow our multi-geo, multi-channel business,” Stuart Forsyth, co-founder and CEO of Minor Figures said in a statement.

Oat milk as a global interest

The oat milk market is predicted to reach $995.3 million by 2027. This has been quantified by a growing interest in vegan and sustainable diets. Plant milk is being widely seen as a more ethical and environmentally-friendly alternative to conventional dairy and oat has now taken second place to almond as the most popular variety.

Asia as a target market

China is anticipated to be Asia’s main driver of plant milk. A growing population and increased interest in alternative proteins, combined with widespread lactose intolerance in the region make for a surging demand for lactose-free milk. Soy and coconut milk have been popular for some time in the APAC region but oat and almond are catching up. The Asia plant-based milk market is expected to surpass $19.8 billion by 2031, if CAGR’s of 10.7 percent are accurate.

“With Green Monday Group, we have a like-minded partner who is focused on constructing a multi-faceted global ecosystem of future food that combats climate change, food insecurity, public health crisis, planetary devastation and animal suffering,” Forsyth said. “We look forward to building on our distribution relationship across Asia as Minor Figures works to meet the increasing needs of plant-based consumers globally.”

“We are inspired by the passion and vision of the Minor Figures team. Their positioning and brand identity really resonate with many new-generation consumers,” David Yeung, co-founder and CEO of Green Monday said in a statement about its investment. “Our strategic partnership will certainly catalyse further impact and change both in Asia and globally.”

Danone has similarly lauded its partnership with Minor Figures as having the potential to contribute meaningfully to a “healthy and sustainable future”. Its investment arm has previously backed Nature’s Fynd, Harmless Harvest and fellow plant milk startup Forager Project.

Opening up the oat milk market

Minor Figures represents just one of many startups seeking to leverage oats as a sustainable plant milk base. In February, the new Singapore brand Oatside unveiled its ‘full stack’ drink, claiming it to be the first of its kind in the country. Managing all elements of production in-house, from oat extraction to packaging, the company states that it has been able to attain clean label status. To date, the brand has launched chocolate, barista, and chocolate hazelnut incarnations. To maintain sustainable credentials, all cacao used is Rainforest Alliance Certified, and oats are sourced from Australia.

Latin America is gaining traction within the plant milk sector as well. The region’s first carbon-neutral food company, Nude, closed a $5 million Series A funding round in January this year. The investment was earmarked for increasing production of its oat milk line, plus the development of new ranges.