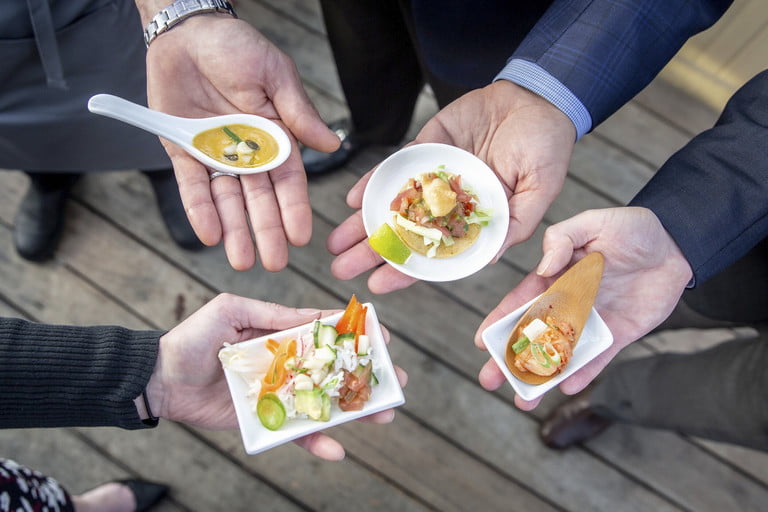 Take the “sea” out of seafood and what have you got left? Well, “food,” obviously. But also quite possibly the makings of a multi-billion dollar industry. At least, that’s the hope of a group of intrepid startups offering a fishier remix of the high-tech meat alternatives made famous by companies like Memphis Meats. These startups are doing the same; only instead of trying to create meat proteins in a lab, they’re attempting to grow seafood from cells in a laboratory, rather than harvesting it from the oceans.

This isn’t just about tech for tech’s sake. With massive problems with overfishing worldwide, with growing demanding for shrinking supplies of seafood, the way fish currently makes its way to our plate isn’t viable long-term. Between 1961 and 2016, the average annual increase in global food fish consumption outpaced population growth. It also exceeded meat from all terrestrial animals combined. Those are figures that not sustainable. Not for us, the fish, or the environment as a whole.

Cellular seafood could be the answer. Just don’t make the mistake of calling it lab-grown fish.

“None of us in the industry would call it lab-grown seafood,” Mike Selden, CEO of Finless Foods, told Digital Trends. “Finless Foods is not lab-grown. We experiment and create our science in the lab, [but] do not produce there. Our products come from a production facility much like a farm is a production facility for animals. We just don’t need the animals to create the nutrition.”

Finless Foods is a biotech company located in San Francisco. Beginning 2017, it’s been working to bring to market a species of cultured bluefin tuna created using cellular aquaculture technology. Shortly after it made its debut, the company produced its first pound of bluefin tuna meat for a cost of approximately $19,000. Since then, however, it’s been working to bring that price down to what it hopes will eventually be a level comparable with regular market prices (roughly $40 per lb.)

Selden said that he terms what Finless Foods is doing as “cell-based seafood.” That separates it from other startups doing related, but distinct work like creating plant-based “shrimp” from specially-engineered red algae. “We’re growing seafood from real seafood cells,” Selden explained. “We take cells from a fish once, and [then grow them endlessly] from that. We do the same process that happens inside of a fish, and make it happen outside of a fish. This increases efficiency.”

On a consumer level, the difference shouldn’t be all that apparent. Finless Foods’ bluefin tuna will look, taste, and feel like the genuine (or, perhaps more appropriately, natural water-dwelling) article. But it can also be made fresher, and free from the likes of antibiotics, mercury and micro plastics.

Finless Foods is not the only fish in this particular ocean. While cellular seafood is still a relatively new and unpopulated space, a growing number of intrepid players are jostling for position. BlueNalu is another company looking to claim a piece of the cellular aquaculture action. Based in San Diego, since 2017 BlueNalu has been working to bring to market its own cell-based seafood. Its name is a riff on the Hawaiin word “nalu” which refers to both the ocean and mindfulness.

“Our products are made from a starting sample of the desired species of fish, where we harvest three kinds of cells that represent the muscle, fat, and connective tissues of the fish,” Chris Dammann, BlueNalu’s chief technology officer, told Digital Trends. “We then feed the cells using a mixture of amino acids, salts, lipids, sugars, and vitamins. [Then we] grow the cells at large volumes in bioreactors that are stainless steel tanks, like in a brewery. This process is similar to other known food processes such as yogurt [which use] bacteria, or beer [which uses] yeast.”

These cells are then concentrated, shaped by way of an extrusion process not dissimilar to that of pasta, and the resulting fillets packaged up for distribution. Or, at least, they will be once BlueNalu introduces them some time around the middle of 2021, FDA clearance allowing. Lou Cooperhouse, CEO of BlueNalu, told Digital Trends that “large-scale production will follow shortly thereafter.”

Wild Type, founded in 2016, is one more California-based startup with designs on rethinking the way we consume fish. Its initial focus is on salmon. Wild Type also has yet to release its first product. But its representatives told Digital Trends that it is “actively engaging with a broad community of chefs, restaurant owners, and food lovers on potential applications” for its cellular fish.

“We’re using cellular agriculture to conserve wild salmon, protect the oceans, and help solve global food insecurity,” Ben Friedman, head of product for Wild Type, told Digital Trends. “While demand for seafood is at an all-time high, wild fish stocks continue to decline, and salmon farms are wreaking environmental havoc on our sensitive coastal ecosystems. Our goal is to provide consumers with a new third option for seafood that is better for them and the planet.”

Cod it be good for sustainability?

The goal of cellular seafood is not, its proponents claim, to entirely disrupt the current seafood industry. Instead, it’s to augment it — and perhaps to help mitigate some of the more harmful and negative aspects of current fishing practices, such as overfishing and illegal fishing.

“I don’t think we’ll ever fully replace fishing for live fish,” said Finless Foods’ Mike Selden. “What we [would] like to do is largely replace industrial fishing and let indigenous people take back their own waters, taking the strain off the ocean to let it heal. Local coastline fishing is neither something we want or could replace.”

Nonetheless, there is a strong sustainability argument repeated by those working in the field. Particularly when it comes to certain marine species, which have halved since 1970, this laboratory-based approach could help create a plentiful supply of certain fish without endangering the survival of certain overfished species as a whole.

“Seafood is known to be tremendously resource efficient relative to land-based beef, pork or poultry,” said BlueNalu CEO Lou Cooperhouse. “While we are not yet in a position to conduct a full life-cycle analysis of our products, [we anticipate] that cell-based seafood will have even greater resource efficiencies as we no longer need to grow the heads, tails, bones or scales that make up 40-60% of the fish. [Rather, we can] focus resources on producing fish fillets that are 100% yield.”

There are still bottlenecks and assorted other problems to be solved before cellular aquaculture can truly start to live up to its potential. Finless Foods’ Mike Selden said that regulatory approval is a big one. “We know that our product is safe but we would also like to publicly demonstrate that,” he explained. “It is important to us to have an efficient but fair pre-market approval process and path to market. That is also very important for cell-based seafoods in general to take hold.”

There’s no doubt that there is a high level of complexity in this cell-based approach to growing seafood. That’s especially true when you factor in the diversity of fish species, which are far more varied than just the cows, pigs and sheep which up the majority of meats consumed in places like the U.S. However, there is reason to believe this can be achieved. Animal cell culture already happens at scale today in the pharmaceutical industry, proving that such a thing is possible at a certain production quota — albeit in a slightly different domain.

BlueNalu’s team additionally points out that, compared to the structure of mammalian meat which other startups are trying to replicate, fish is comparatively straightforward.

“It is technically easier to generate cell-based fish meat than a piece of beef or pork,” said BlueNalu CTO Chris Dammann. “To this point, BlueNalu has recently demonstrated that its first products, which are small pieces of whole fish muscle made from the cells of yellowtail, can be prepared in many ways, including deep fried for fish tacos, raw, or acidified as in poke or ceviche — and performs the same as conventional seafood in all respects.”

More players are beginning to enter the field, too. From just a handful a couple of years ago, soon the cell-based fish industry will be thriving with newcomers, all with their own spin on the technology or its application. Air Protein, for instance, has an innovative approach to creating cellular seafood patterned after science NASA developed in the 1960s for feeding astronauts. “We are working hard to build upon our technical successes to bring air-based meat analogues, including seafood, to the marketplace,” Dr. Lisa Dyson, CEO of Air Protein, told Digital Trends. “Details on timing for specific products will be announced in the future.”

Particularly once the first cellular seafood products come to market, others are likely to pour in as well. And why not? With the promise of leading this exciting new market and helping create a sustainable alternative, there’s every reason to be excited.

You could even go so far as to see it’s a great oppor-tuna-ty. You probably shouldn’t, though. That may be one fish pun too many.