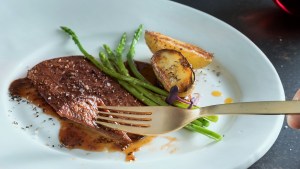 Cell-cultured meat is ‘likely’ to make up 40 percent of future meat intake, according to a new survey.

Research published by Foods, led by Keri Szejdda, Ph.C., quizzed more than 2,000 Brits and 2,000 Americans on how their diet may change.

The future of meat intake

Most participants said they were unfamiliar with cell-cultured meat.

However, when presented with a description of the innovation – the average response predicted slaughter-free meat would make up around 40 percent of their future meat intake.

Moreover, 40 percent of consumers said they were ‘very’ or ‘extremely’ likely to cell-cultured meat.

‘A better alternative to industrial farming’

Didier Toubia is the Co-Founder and CEO of Aleph Farms, which commissioned the research. In a statement sent to PBN, he said: “To turn this expected acceptance into actual consumption patterns over time, it’s critical to develop the right products, based on the right solution.

“In the long term, Aleph Farms’ vision is to provide a better alternative to industrial livestock farming, which represents approximately 70 percent of global meat production today.”

The study also highlights the generational difference when it comes to attitudes towards cell-cultured meat.

Toubia then added: “In contrast to the younger eager adopters, the older generations are warier of change.

“Social proof is important to them and they want to be assured that a product is safe, functional, and beneficial before they adopt it. This is why transparency and trust are cornerstones of our company.”

You can read the full study here