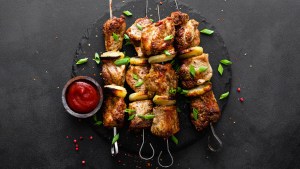 A cell-cultured chicken brand has slashed its production costs, speeding up its goal of reaching price parity with real poultry.

Future Meat has reduced its production costs by almost 50 percent. It can now create 110g of slaughter-free chicken breast for under $4.

The start-up’s Chief Executive Rom Kshuk predicts the cost will drop to below $2 in the next 12-18 months.

He told the Financial Times: “We will launch a product in the US market in the next 18 months that will have a commercially viable price.”

Cell-cultured meat could become available in grocery stores as soon as 2026, according to one expert.

Dr. Simon Somogyi is the director of Longo’s Food Retail Laboratory and Arrell Chair in the business of food at the University of Guelph.

In an interview with Sudbury, he said: “When it comes to cellular-based meat, it’s very basic meat that we’re talking about. Something that would compete with ground beef for example.

“At this point in time… It’s not possible to make a steak that has a bone attached to it, because that’s a little more complicated. And, the texture of steak is different from ground beef which is very much minced stuff.”

He added that advancements in technology mean other cell-cultured seafood could become available in retailers in the next decade.