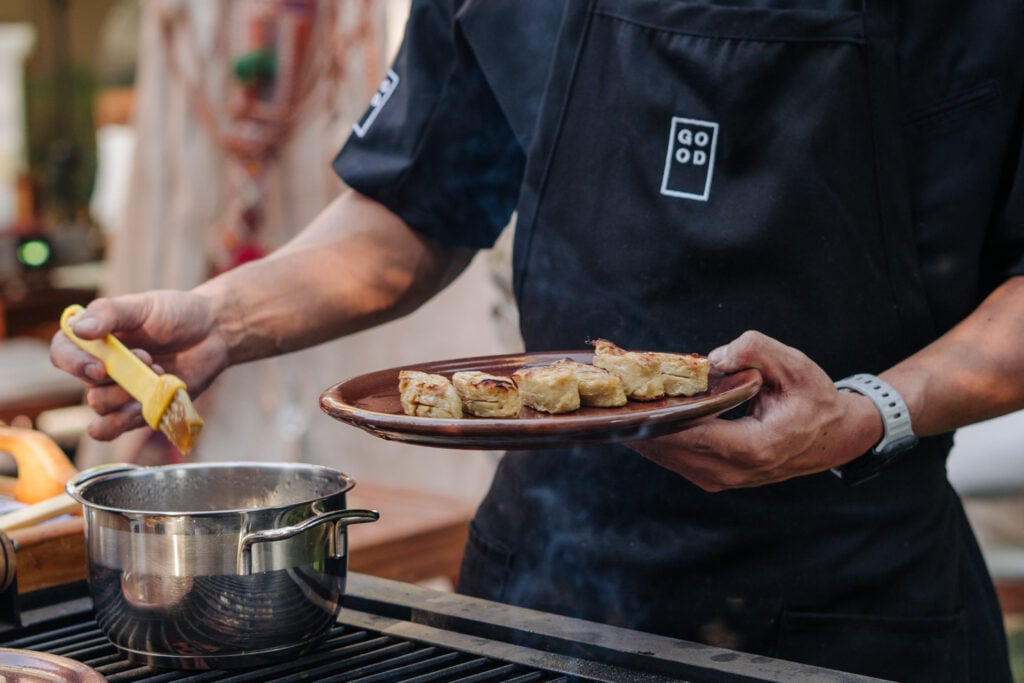 Cell-based meat was put on the COP27 menu for the first time ever this year at the event’s Singapore Pavilion.

Currently, the Southeast Asian country is the only place in the world that sells cell-based – also known as cultivated – meat. Eat Just, the company that creates the product, attended the United Nations climate conference. It is currently taking place in Sharm El Sheik, Egypt.

Its cell-based meat division, GOOD Meat, served a range of chicken dishes. Sampling occurred at invite-only demonstrations held from November 12 to 14. Members of the press, government ministers and other notable figures were asked to taste the food.

The tastings come after regular menus at the summit were revealed to have leant heavily on meat and dairy ingredients. Beef and imported salmon featured prominently. Despite anger and disappointment that last year’s event included climate-damaging foods on the menus served to delegates, the pattern has repeated this year. This has resulted in criticism that the summit is not taking the food system’s impact seriously.

GOOD Meat chose to showcase its newest chicken development at the climate event. Ahead of service, Josh Tetrick, co-founder and CEO of Eat Just said: “We hope our guests at COP27 find their cultivated chicken meals both delicious and thought-provoking and they leave the summit with a new appreciation for the role food innovation can play in combating the global climate crisis.

Climate experts are increasingly recommending plant-based diets. However, cell-based meat is also proposed as a solution to animal agriculture’s devastating impact on the environment.

Having the potential to reduce the emissions generated by conventional meat production by up to 92 percent, cell-based alternatives are eyed optimistically by those who are climate aware.

The crux of the sustainability claims that underpin brands such as GOOD Meat is a reduction in methane emissions and deforestation. This will be a natural benefit of taking animal rearing and slaughter out of the food system. All this, while still offering consumers the animal protein that they enjoy.

However, despite the supporting science, cell-based meat’s global adoption has seen slow progress. Singapore, the pioneer of cultured regulatory approvals, has still only given the green light to two products. Both are chicken developments from GOOD Meat. It is due to give permission for another variation shortly after the COP27 summit comes to an end.

Outside of Singapore, things are moving at a seemingly slower pace. The US and EU have been particularly slow to grant approvals. However, the US Food & Drug Administration (FDA) recently ruled that chicken made by Californian start-up UPSIDE Foods is safe to eat.

“Singapore was the first country to allow the sale of meat made without tearing down a single forest or displacing an animal’s habitat, and we look forward to other countries following in their footsteps,” Tetrick said in a statement.

Could cell-based replace conventional meat at the next summit?

COP28 will be held in Dubai. This gives rise to optimism that if meat has to be served (despite repeated calls from activists for the event to be 100 percent plant-based), perhaps it could be cultured instead of slaughtered.

Though no approvals are in place yet, it was revealed earlier this year that Israeli food tech Aleph Farms is in discussions to produce cultivated beef and lamb steaks for the UAE. Talks occurred following investment from the Abu Dhabi sovereign fund ADQ.

Additionally, Nutrition Insight recently reported that the Dubai Future Foundation discussed the potential of cultivated meat to solve food security and sustainability issues. It did so at a two-day self-titled forum.

Dubai is showing signs of being open to cultured meat developments. However, it is unknown if it will seek to serve them when hosting the world’s largest climate summit.

The post Cell-Based Meat Served At UN Climate Conference For First Time Ever appeared first on Plant Based News.