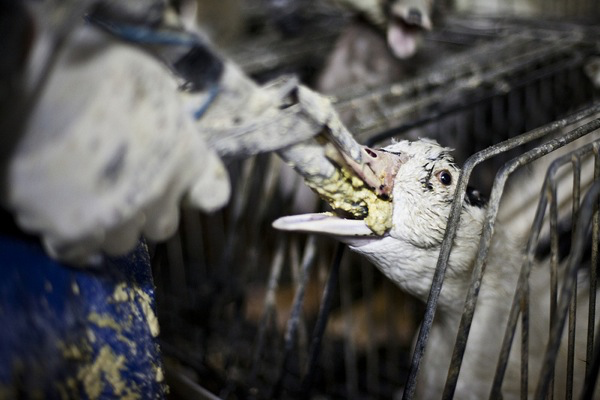 When dining at an exclusive restaurant, you may come across foie gras on the menu. It is a high-priced gourmet delicacy that has existed for many years. Foie Gras is fattened goose or duck liver, cherished in the French cuisine for its rich flavor and silky texture. This delicacy has existed for centuries, dating back to the Egyptians, and later spreading to the Greeks and Romans. In the 1500s, it became widely accepted as an exclusive dish throughout Europe. Then, in the 1980s, foie gras was first produced in America and sold at top restaurants in New York, eventually spreading across the country. So why is this dish so special?

The exclusiveness of foie gras is essential to the dish. Foie gras requires the feathered animal’s liver to expand to nearly ten times its healthy size. This distortion of the duck or goose’s body is accomplished through force-feeding using a feeding tube. In addition to the generally cruel nature of raising animals for slaughter, this method of producing food is an extreme case of animal cruelty.

In 2006, Chicago was the first city in the U.S. to ban the sale of foie gras. This law was, unfortunately, later overturned in 2008. California was next to ban foie gras in 2012, though this law was reversed in 2015 and reinstated in 2017. In 2019, New York City officially moved to prohibit the sale of foie gras, with a three-year grace period for food vendors before the ban would be enforced.

Internationally, many countries have a ban on the production of foie gras due to their animal welfare laws. This list includes Denmark, Finland, Germany, the U.K., Switzerland, Sweden, Ireland, the Netherlands, Luxembourg, Norway, Poland, Israel, the Czech Republic, and Argentina. However, this ban does not prevent the sale of foie gras. The only country that has a complete ban on both the sale and production of foie gras is India.

How does the process of fattening the liver affect the geese or ducks?

The geese and ducks bred for foie gras spend the first four weeks of their lives eating and growing. Once they resemble adults, they are confined to cages and fed a high-protein, high-starch diet to promote rapid growth. For 2–3 weeks, these birds are forced to eat four pounds of food through a tube every day. The tube is pushed approximately five inches down their throat. If the feed gets stuck in their throat, a stick is used to push it down. The carcasses of the slaughtered animals show severe tissue damage to the throat and neck muscles.

The cruelty behind foie gras farms

These animals suffer a plethora of medical conditions due to the confined spaces and extreme force-feeding. The animals are unable to bathe or groom themselves, and many of them have damage to the esophagus, fungal infections, heat stress, lesions, ruptured organs, and fractures of the wings, legs, and sternum. Some of the birds die of aspiration pneumonia due to the force-feeding or even choke on their own vomit. It has been calculated that roughly 15,000 ducks die every year as a result of health conditions on a single foie gras farm prior to being slaughtered. The method that causes the liver to enlarge to almost 10 times its normal size is a disease called “hepatic steatosis,” also known as fatty liver disease.

This process is an extremely cruel and painful process for the birds. However, many food industry professionals protest the bans on foie gras and are enraged because they believe the laws to be unjust. Many chefs believe foie gras is a delicacy that people need to experience, and experience frequently. French law even states that “foie gras belongs to the protected cultural and gastronomical heritage of France.” Although there have been movements to ban the production of foie gras, it is still sold in most exclusive restaurants and will take many decades to be completely banned. However, there is a simpler path that can appease both the animal rights activists and food industry professionals—cellular agriculture.

How does lab-grown meat fit into this industry?

The advantage of foie gras in cellular agriculture production is that the texture of foie gras is silkier and more compact and does not require the structured fibers that steak or bluefin tuna demand. This makes it easier to produce, as mimicking the texture is less complex than mimicking muscle tissue. This process is also less time intensive as it only takes three to four weeks after cell harvest, whereas current foie gras production takes three months from hatching to slaughtering. Moreover, the target consumers of foie gras are willing to pay a high price for this product, which will simplify the entrance into the market for cellular agricultural production, which is often too expensive to compete with current products.

IntegriCulture is a Japanese cellular agriculture start-up that has patented bioreactor technology to create various lab-grown meat products. One of their main ventures has been creating cell-ag foie gras. They have developed a medium formulation made entirely from food-grade materials and have used this to create edible cell-based foie gras. Future-food gastronomist Chef Kuwana was able to try their cell-based foie gras. He described it as a “pure and mellow foie gras with a sweet and gentle spread.” In 2020, IntegriCulture raised $7.4 million in a Series A round to help launch cell-based foie gras in several restaurants by 2021.

Gourmey was founded in 2019 by a stem cell biologist, molecular biologist, and entrepreneur. The foie gras industry in France is a billion-dollar market with many ethical controversies. According to Morin-Forest, 75% of French consumers are uncomfortable with the way the delicacy is produced. Gourmey is cultivating duck egg cells to create ethical foie gras. The extracted duck egg cells are placed in a cultivator bioreactor and fed the proper nutrients—sugars, vitamins, and proteins that are found in a duck’s natural diet. As the cells multiply, the nutrients are adjusted to replicate the effects of force-feeding on a cellular level. These fatty liver cells are eventually harvested and can be cooked and served the same way unethical foie gras is prepared.

Cellular agriculture allows the democratization of delicacies such as foie gras and can help alleviate the pain of slaughtering animals whilst appeasing culinary chefs and gastronomists. One of the main benefits of cellular agriculture is the ability to preserve animal welfare while still allowing consumers to enjoy the same products. The main hurdles for more common products are the price point and the re-structuring of cells; however, since foie gras is mainly targeted to a wealthier consumer, a competitive price will be more easily maintained. Moreover, foie gras does not require the same finesse and innovation to create structured meat fibers as many other lab-grown meat products, which simplifies the production process. Foie gras may be one of the first lab-grown meat products to enter the market and scale out to various locations.