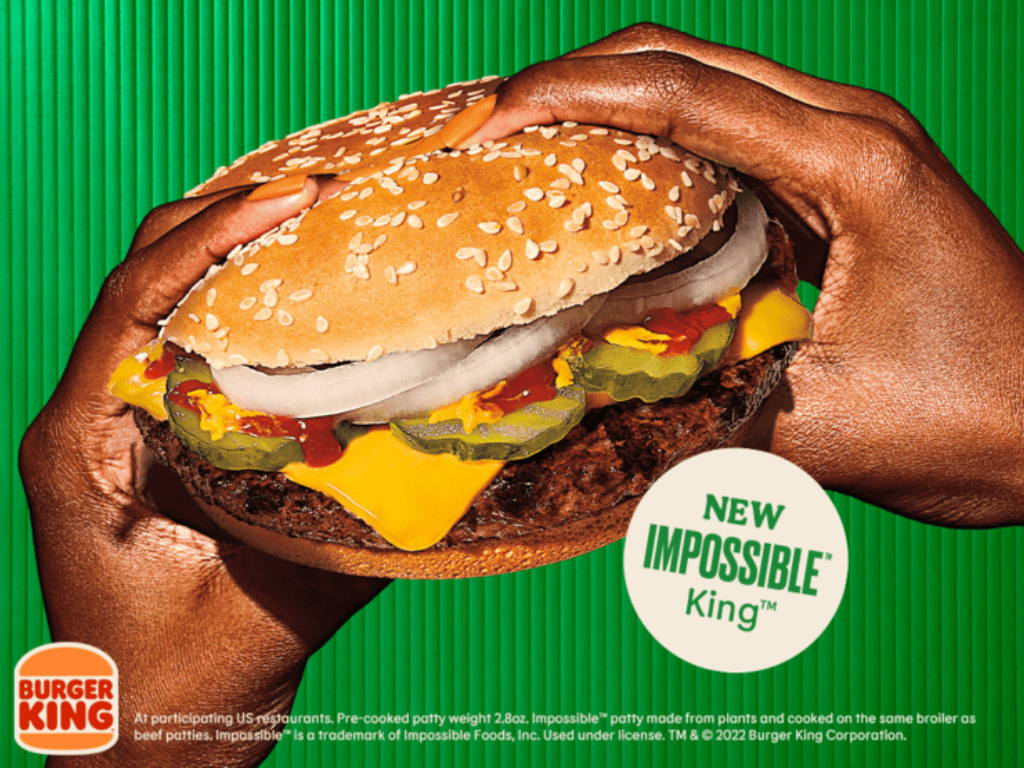 As a way to tempt meat-eaters to consume less animal protein, the two new Impossible launches are a positive step forward, though the inclusion of cheese and bacon could be observed as a step back.

Specifically, it could be shortsighted to not source plant-based bacon, especially as Burger King France has just entered into a domestic partnership with La Vie, to use its vegan bacon in its vegan Steakhouse sandwich. The collaboration came after La View marketed directly to the fast-food giant, taking out a full-page advert in Le Parisien and courting it with compositions of its products in existing burgers.

Despite the apparent flexitarian angle of the new U.S. launches, Burger King has previously aligned itself with the plant-based community, including its pledge to make at least 50 percent of its menu meat-free by 2031.

In a significant show of vegan solidarity, London’s largest Burger King restaurant was transformed into a fully plant-based outlet for a full month, back in March. The whole 25-item menu at Leicester Square was vegan-friendly, including bacon, provided by French startup la Vie, and cheese. This was not the first location to be trialled as a meat-free destination and followed in the footsteps of similar initiatives in Madrid and Cologne.

Madrid’s dalliance with ’Vurger King’, in October last year, was supported by meat analogues from Unilever-owned The Vegetarian Butcher, mirroring an earlier event in Germany. Combined, the three meat-free pop-ups confirmed to Burger King that there is demand for veganised or at least plant-based versions of their popular menu items. So much so that Basel and Geneva now play host to meat-free Burger King restaurants.

The burger chains that aren’t compromising

It was just announced that former Burger King chef Michael Salem is working with actor Kevin Hart on his new 100 percent vegan Hart House burger chain. The chef was poached from Burger King, after developing the Impossible Whopper. Salem’s reason for making the switch is likely to be a sting in the tail for his former employer. “I’ve seen too many animals die,” he told Los Angeles Mag. “I’ve been too guilty about the food I’ve been serving the community, making people really unhealthy for a long time, and I just don’t think it’s necessary. I think this is really the future of fast food, so that’s why I took the gig.”

In May, it was confirmed that Stand-Up Burgers, an off-shoot of Veggie Grill, is opening a fourth location. The Culver City restaurant is the first Los Angeles spot for the brand, which specialises in veganised versions of classic American fast food. Burgers, hotdogs and homely sides including tater tots are menu staples. Like Burger King U.S., Stand-Up Burgers works with Impossible Foods for its patties, housing them in brioches buns and creating seven signature styles.

All images by Burger King, unless stated.