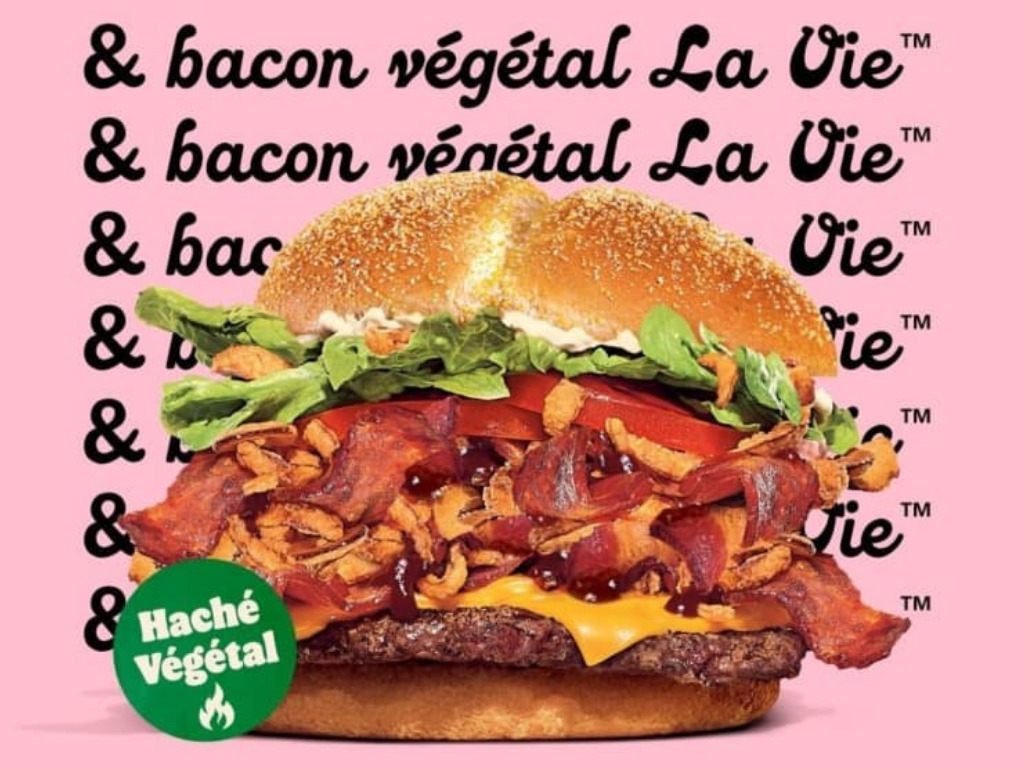 Burger King France has announced that it is partnering with French vegan pork startup La Vie Foods to add its bacon to menus across the country. The collaboration is slated to be exclusive to the French market for six months. La Vie had teased its partnership with Burger King on its social channels for a week prior to the official announcement.

The announcement comes after Burger King transformed its flagship London Leicester Square restaurant into a fully vegan location for one month. La Vie supplied the bacon for its burgers during the experiment and is now onboarding for half a year.

La Vie entered 430 Burger King restaurants as of May 24. This represents every location currently operating in France. Its plant-based bacon rashers will be used in the Veggie Steakhouse burger, a vegetarian version of one of its best-selling sandwiches. La Vie actively campaigned for the partnership, creating digitally doctored imagery of Burger King’s formerly bacon-free Steakhouse to show how it could look with its own rashers added. It later took out an advert in Le Parisien, highlighting consumers’ demands for the two to work together. The unconventional approach worked, with Burger King taking notice.

Posting about the partnership on LinkedIn, La Vie joked that it “didn’t spam the Instagram feeds of all our followers for nothing”. The company went on to state that the Burger King partnership was the latest step forward in its mission to bring vegan food to as many people as possible.

Burger King has offered no confirmation, but a wider European rollout is being speculated as possible if La Vie’s bacon proves popular in its home country.

In terms of fast-food chains looking to embrace vegan and vegetarian diners, Burger King has a history of stepping up. In the U.S. it has a long-standing agreement with Impossible Foods to supply its meat-free patties. Asia is partnered with Australia’s v2food and in Europe, Unilever-owned The Vegetarian Butcher develops its meat substitutes. Between them, these three suppliers have allowed Burger King to offer a variety of burgers, chicken sandwiches and nuggets, all suitable for animal-free eaters.

The chain hasn’t always gotten it right. Back when it first launched the Plant-Based Whopper, it secured the ire of vegans, who took umbrage at the inclusion of egg-based mayonnaise. The chain redeveloped the recipe and brought it back in a fully veganised format and as a permanent menu option. The burger has since gained vegan certification to reassure diners.

La Vie’s rise to the top

La Vie, previously 77 Foods, has been on a steady upward trajectory since being founded in 2019. Engaging in three years of R&D, the company finally released its bacon at the start of this year. It claims that consumers can’t tell the difference between its 100 percent plant-based rashers and conventional bacon.

In a major coup for the startup, La Vie confirmed the closure of a record-breaking €25 million Series A funding round in January. It was the largest single alternative protein raise for a French food tech and was immediately earmarked for supporting an aggressive expansion plan and funding new developments. Vegan activist and Hollywood actor Natalie Portman was amongst the investment participants, alongside Oatly chairman Eric Melloul.

Burger King is not alone in adding extra flavour to vegan burgers within France. Earlier this month it was announced that 21-time Michelin-starred chef Alain Ducasse has opened a pop-up vegan burger location in Paris. Burgal differs from most vegan burger joints in that it makes no attempt to recreate conventional beef. The burgers, served on plant-based brioche buns, are made from quinoa, lentils and vegetables. The location is due to close on June 30 after which, demand for the burgers will be assessed with them potentially being added to the menus of Ducasse’s 80 plus other restaurants.