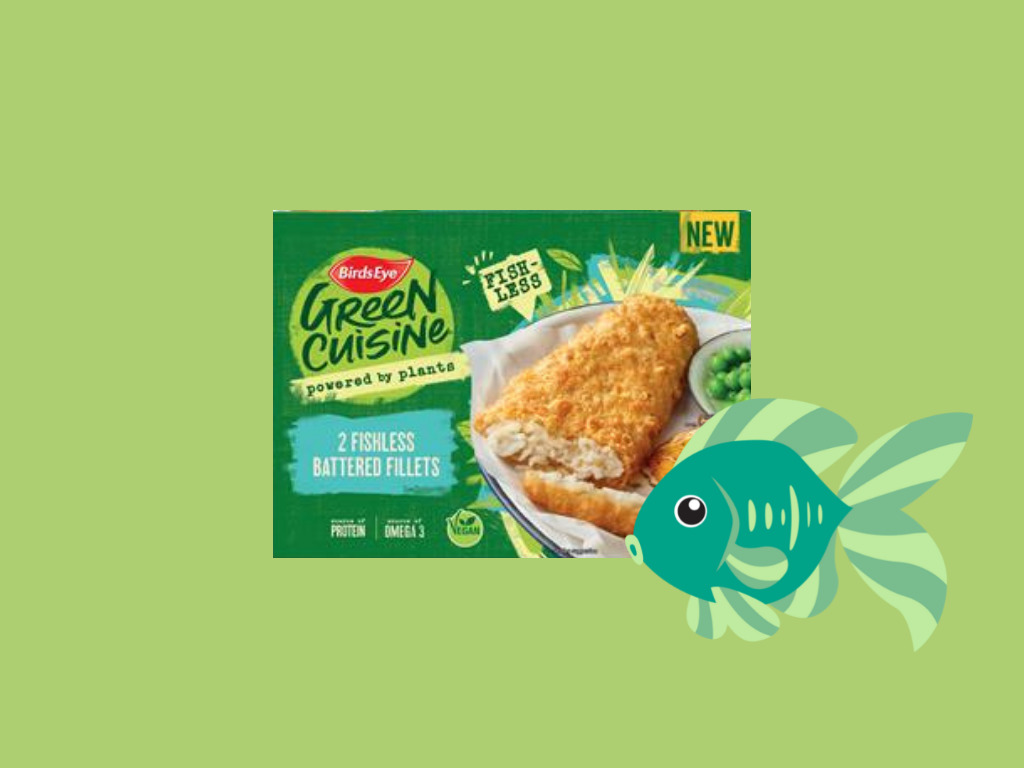 Birds Eye has expanded its Green Cuisine range to include Battered Fishless Fillets. It comes as the company seeks to replicate its most successful conventional lines. The animal-based Birds Eye Battered Fish Fillet is the most frequently purchased frozen fish line from the entire product portfolio.

The new vegan fillets have been developed using rice protein and are wrapped in the same coating as the conventional fish offering. Key development benchmarks included ensuring high levels of omega-3 and protein were included in the composition.

The new fillets have gone on sale in the U.K. Currently, they can be found in Tesco stores, with plans for a wider retail rollout later this year. The launch comes as Birds Eye looks to lean on its experience as a CPG giant while using existing products as a template for inclusive new lines.

“[we have a] vision to bring the nation’s most-loved flavours to the flexitarian and meat-free consumer, [as well as capitalising on the] huge opportunity for the fishless category,” a spokesperson for Birds Eye said in a statement.

To date, Fishless Fingers is the only other seafood analogue to have been released under the Green Cusine label. The wider range includes burgers, chicken dippers, and Southern fried chicken reimaginings. The Fishless Fingers feature the same rice protein filling but with a “signature” golden crumb coating. They were released almost one year ago.

“Our Battered Fishless Fillets tap into the consumer demand for products that can help them reduce their meat intake while ensuring flavour, health and convenience remain,” Victoria Westwood, Green Cuisine senior brand manager, told The Grocer. “Following on from the success of Fishless Fingers, Battered Fishless Fillets offer a range of nutritional benefits, such as being a source of omega-3, which plays an important part in maintaining heart health.”

Birds Eye claims that its fish finger analogue generated £630k in sales in its first year and pushed Green Cuisine, as a brand, to 9.8 percent household penetration, up from 9.1 percent, prior to it launching. It hopes to replicate the success with its new fillets.

Embracing all forms of alternative seafood

Alongside its vegan lines, Birds Eye’s parent company, Nomad Foods, is dipping its toe into the cultivated seafood game. Last November it was reported that Nomad had signed a collaborative working agreement with BlueNalu, a U.S.-based food tech engaged in cultivated seafood development. The two were said to be undertaking market research and regulatory approval investigations together, ahead of product development. The aim is to bring Europe’s first cell-based seafood to market.

Plant-based seafood taking on many guises

As demand for animal protein continues to increase, fish stocks are depleting at an unsustainable rate. Because of this, more companies than ever are looking to develop vegan seafood alternatives that can take the place of conventional fish meat. Looking to offer similar nutritional profiles remains a challenge, but startups are looking to leverage unexpected methodologies and ingredients to unlock high protein yields and essential Omega-3.

U.K. tempeh manufacturer Better Nature is one of the latest to announce its plans to develop alternative seafood. Using traditional tempeh fermentation techniques, fuelled by food industry byproducts, the food tech hopes to replace conventional fish in the food system. To develop its idea, it has been awarded a £350k grant from Innovate U.K.

Canadian startup Smallfood hopes to cater to the alternative seafood market with its newest algae-based whole food ingredient. It claims that, when added to a seafood analogue, the additive improves taste, texture and nutrition, while being a sustainably-produced part of the value chain. Full details have not yet been released but the ingredient is said to increase omega-3 and protein yield for fish-free seafood products.