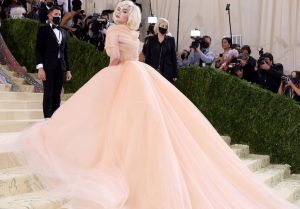 Without further ado, here’s the latest in vegan celebrity news this week.

Making her Met Gala debut, the seven-time Grammy Award-winning Eilish strode up the red carpet in a peach-colored tulle Oscar de la Renta ball gown with a 15-foot train. But that’s not all that was big about the 19-year-old’s gown: it’s a big victory for animals, too. In exchange for Eilish agreeing to wear the gown, the vegan singer convinced the label to end its use of fur. The move makes Eilish, this year’s Met Gala co-chair, the only notable guest to use the high-profile event to elicit an animal rights policy.

Eilish told the New York Times that she found it “shocking that wearing fur isn’t completely outlawed at this point in 2021.”

While the label ditched fur from its red carpet designs in recent years, fur was still being sold in stores, making up a “meaningful amount of sales and profit” the label said. Once Eilish stepped onto the red carpet, that all changed.

Aniston’s natural hair care brand, LolaVie is both vegan certified and cruelty-free. ‘As a Leaping Bunny certified company, we do not conduct, commission or act as a party to any animal testing’, the brand states. Additionally, it claims its manufacturers must be cruelty-free as well.

LolaVie is also centered on utilizing natural plant-based ingredients that are ‘easy on the environment’. For example, all formulas are made without silicones, parabens, and sulfates. Ingredients include bamboo essence and chia seeds.

The line currently offers a Glossing Detangler lightweight spray at $25, which took five years to develop.

Upon announcing the news last week, Aniston told her Instagram followers: “This project has been in the works for a long time and I’m so excited to finally be able to introduce it to you.”

In New York, stars gathered to honor some of the world’s most loved music releases. Normani was among those to perform live, but not before debuting a two-piece Patrycja Pagas vegan leather dress on the red carpet.

Singer Normani, who is a former member of the girl group Fifth Harmony, sported a vegan leather look at the 2021 Video Music Awards show this weekend. In New York, stars gathered to honor some of the world’s most beloved musicians.

Normani was among those to perform live, but not before debuting a two-piece Patrycja Pagas vegan leather dress.

Despite eating a plant-based diet in the past, Normani revealed sticking to a strict vegan lifestyle was ‘too difficult’. In an interview with Women’s Health she said she still avoids dairy products, as well as pork and beef.

Grammy-award-winning singer Ariana Grande is soon to debut her vegan beauty range. This fall, R.E.M Beauty will be released after two years of development.

The star is launching the vegan line with Forma Brands, and told Allure it will come out in a series of ‘drops’. Eye make-up is coming first, as eyes are ‘the main storytellers and sources of communication’ Grande added.

It comes just months after Grande unveiled a cruelty-free vegan perfume, God Is A Woman. The iconic musician is a longtime supporter of animal rights and has even opened her own rescue center in Los Angeles, California. Moreover, the 28-year-old has adopted 10 rescue dogs herself – as well as a pig named Piggy.