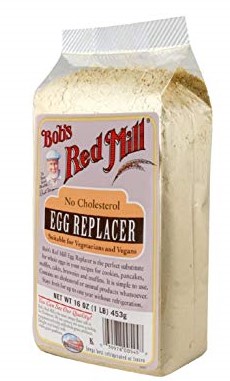 Before going vegan, I ate eggs every day for years.

So I had a big hole to fill after making the switch.

Luckily, it’s not hard to substitute for eggs in baking with vegan alternatives, and there are even some plant-based egg recipes that come close to the original.

The Best Direct Vegan Egg Substitutes for Cooking and Baking

I’ll break down all your alternatives, but keep in mind that the best alternative for a situation is dependent on why you’re using the egg.

The 4 main attributes that eggs provide are:

There are no perfect substitutes that cover all 4 of those areas, but most cover 2-3 that I’ll mention.

These are my go-to substitute when cooking.

Easy, incredibly healthy, and great for matching the moisture and binding properties of eggs. It’s a great vegan egg substitute for breading when a recipe calls for it.

To make a flax egg, just mix 1 tbsp of ground flax with 2 tbsp of water in a bowl or cup, and mix together. Let it sit for 5 minutes or so in order to let the flax soak up the water.

This is the closest direct substitute for eggs when baking.

Many companies make one, but the easiest to find is Bob’s Red Mill Egg Replacer:

It’s made from soy flour, wheat gluten, corn syrup solids, and algae. Obviously not a good replacement if you’re gluten sensitive, but there are other egg replacers that don’t have gluten.

The taste is different, but not bad (typically sweetness is good in baked foods anyways).

It won’t help your food get fluffier, but if you’re using baking soda or powder already, you can typically get away with it.

Each egg you need should be replaced with 1/4 cup of the mashed fruit.

The classic pair of vinegar and baking soda adds moisture and fluffiness to things you bake.

You can substitute an egg with 1 tablespoon of vinegar, and 1 teaspoon of baking soda.

It’s also a decent egg substitute. The texture is very similar (that bouncy rubbery texture), and adds some moisture to whatever you’re baking. Note that it will be heavier than actual eggs.

Blend about 1/4 cup of silken tofu (the really soft stuff) for every egg you need to replace.

You can also use silken tofu in certain vegan heavy cream substitutes.

If you have a soda stream, you can even use carbonated water in a pinch.

It gives you the moisture of course, plus the carbonation will help make your baked goods lighter and fluffier. Again, you want about 1/4 cup per egg.

You can also consider using carbonated water for a flax egg to lighten it up a bit.

It’s typically used in vegan butters because it’s so good at holding things together and making the overall texture smooth.

That’s the main purpose of egg yolks in recipes that specifically call for them, so soy lecithin is a decent substitute.

Use 1 tablespoon of lecithin for each egg yolk you need to replace.

Egg whites are commonly used to whip up fluffy cream in recipes.

While a bit harder to find, aquafaba works almost as well, and is a good direct substitute.

Aquafaba is the foamy stuff at the top of a can of chickpeas, just scoop it out and use as needed. You can whip it up in the same way.

Here’s a great detailed guide to making and using aquafaba.

Vegan Alternatives to Eggs For Breakfast

It’s tough to find vegan substitutes for all the various form of eggs used in breakfasts, but there’s some good ones for the most common versions of eggs.

You can use vegan egg replacers like “Vegg” or “VeganEgg” to make scrambled eggs directly. You’ll find these in most grocery stores in the milk/egg section, but they’re quite expensive.

The better option to me is to make a tofu scramble. Super high in protein, comparable to egg protein, and has a similar texture. The taste will take a few times to get used to, but it’s pretty good.

There are also a few tofu-based recipes for vegan fried eggs if you really want to get creative.

While none of these substitutes are perfect, they’re all good in their own ways.

I honestly can’t tell the difference between recipes that I’ve made both pre- and post- going vegan when I’ve used egg substitutes like flax or applesauce.