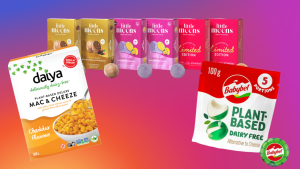 Veganuary might be over, but the plant-based revolution is just getting started. From supermarket to restaurant, we’ve wrapped up our favorite recent food launches to power you forward into the coming weeks. Among them are the likes of Babybel, Meatless Farm, Daiya, Little Moons, and Côte Brasserie.

If you’re one of the many people sticking with the vegan pledge, we’ve got you covered.

Babybel Plant-Based finally lands in the US

The iconic cheese product, Babybel, scored big in the vegan world after it was revealed that Bel Brands USA was to create a vegan version.

This is the one many of us were waiting for — Bel Brands USA has finally announced the release of its plant-based Babybel stateside.

The news surfaced in a report in 2020. And late last year, the product arrived in the UK at Sainsbury’s outlets.

Now, Bel Brands USA announces customers across the pond will be able to try it nationwide.

“It’s no secret in the dairy industry that cheese is one of the most technically challenging spaces for dairy alternatives because of its complexity. And the plant-based cheese category has largely struggled to deliver offerings that are delicious, accessible and meet consumers’ expectations of cheese – until now.”

They went on to say that they’re “proud” to offer the creamy texture and “delicious” taste from the original dairy product in plant-based form.

Starting next month, Babybel Plant-Based will be available at “select” retailers.

The company is yet to confirm exactly which stores, but its other products can be found at Sprouts, Trader Joe’s, Kroger, Stop & Shop, and Giant Foods.

Now, its plant-based Burgers, Chicken Burgers, Meatballs, Mince, and Sausages are available in all 500 Morrisons outlets.

The launch comes in a bid to make plant-based offerings even more accessible and convenient.

Managing director Michael Hunter said: “We are on a quest to democratize plant-based food making it accessible for all.

“And our frozen range takes us a step closer to achieving that by providing more product in packs to offer consumers value and convenience.”

The company’s Mac & Cheeze pouch can be made by adding it to cooked pasta.

Daiya is available across major US retailers including Kroger, Target, Whole Foods, and Sprouts. To check availability near you, visit Daiya’s website here.

The potato gratin dish originated in the French Alps and usually comes with bacon lardons. But Côte’s Vegan Tartiflette uses THIS Isn’t Bacon alongside a creamy sauce made with dijon mustard and vegan cheese.

With French cuisine traditionally involving dairy, the restaurant firm said it didn’t want diners to miss out on such a “quintessential” ski-resort dish.

In a statement sent to PBN, Veganuary commented: “By expanding its vegan and plant-based offerings, Côte is proving there’s no need to scrimp on flavor or indulgence when it comes to ‘veganizing’ classic French dishes.”

The Vegan Tartiflette is available at Côte’s 84 sites until March 29, so get it while you still can. Let’s hope they extend the dish beyond Vegnuary next year.

Mochi became a global trend on TikTok and is now widely available in major retailers.

The PeaNOT mochi is available as part of a Veganuary bundle alongside two other flavors – Passionfruit & Mango and Belgian Chocolate & Hazelnut.

While it’s available for a limited time only, the company confirmed the products can be purchased throughout February.

The Tzatziki features “cooling” cucumber and mint, while the Garlic Aioli is made with a roasted garlic purée with mustard and soy protein.

Commenting on the launch, co-founder Tom Walker said: “Our principles around wholesome, quality ingredients and delicious homemade taste give us a genuine point of difference in dips for consumers across the board.

“We are becoming increasingly discerning about taste and what goes into our food.

“Whether you are vegan, or not there is a trend towards simple ingredients with authentic foodie credentials. And the Holy Moly range taps into that insight.”

The post Babybel Plant-Based Lands In US And 5 Other Top Vegan Food Launches appeared first on Plant Based News.