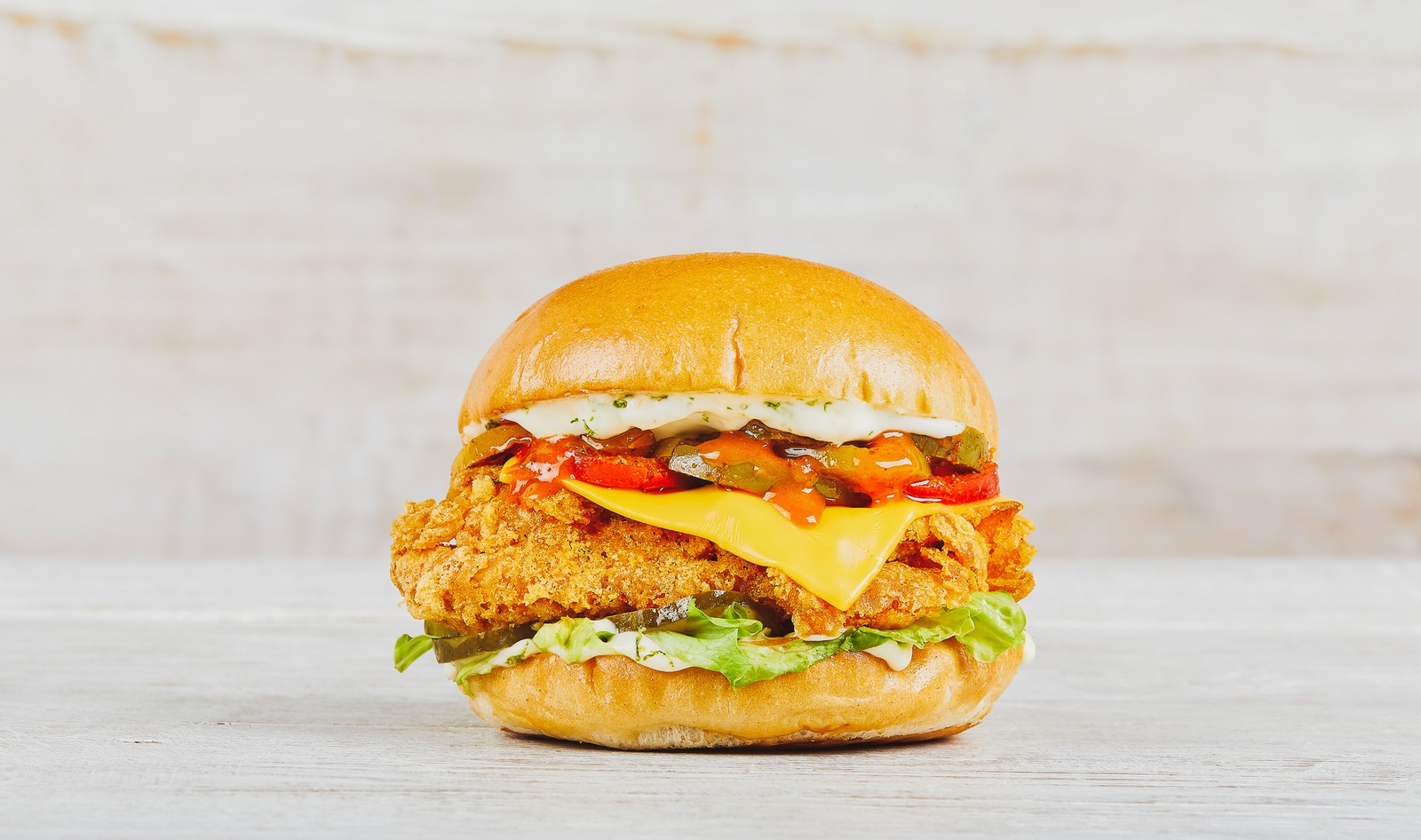 The two brands worked together to perfect these nine options, which include four burgers (Vegan Big Cluck, Vegan Cheesy Cluck, and Vegan Smokin’ BBQ); four versions of these burgers served as wraps; meatless chicken strips with dips such as barbecue sauce and vegan lime mayo. The restaurant will use a separate fryer to prepare the vegan dishes but notes that cross contamination is still possible.

Mother Clucker has been in operation since 2013—first as a food truck and then a bigger shipping container—and the Islington shop is its first sit-down location. With its nine Meatless Farm menu additions, Mother Clucker now offers more vegan chicken options than any other quick-service chicken shop.

“We want our iconic Fridays service, spirit of generosity, and delicious, freshly prepared food to be available to everyone, which is why we’re delighted to be launching our best-ever range of plant-based options,” Robert B. Cook, CEO of TGI Fridays UK, said in a statement.

This menu update represented the first time TGI Fridays added plant-based chicken to its menu, which it did after introducing the Beyond Burger to both its US and UK locations in 2018 and 2019, respectively. TGI Fridays has yet to add a vegan chicken option to its locations in the US.

The UK is home to the world’s first vegan fried chicken shop, Temple of Seitan, which opened its doors to massive crowds in 2017, despite rainy weather. The shop has since expanded to four locations and continues to delight visitors with its seitan-based vegan fried chicken and sides.

With the success of vegan chicken and growing popularity of plant-based foods in the UK, traditional chicken shops are getting into vegan chicken, too.  KFC’s earliest ventures into plant-based chicken were in partnership with Quorn in the UK. Originally called “The Imposter” burger, the Vegan Burger first appeared at test locations in the UK in 2019—where the vegan chicken option consistently sold out within hours. By January 2020, KFC added the Vegan Burger to all 900 locations across the UK and sold one million orders that month—or about one burger every three seconds.

And new brands, both locally grown and from overseas, are entering the UK to feed its citizens’ desire for better chicken—the animal-based version of which is the most consumed protein per capita in the UK. Last month, California company Impossible Foods made its entry into the UK with both its plant-based chicken nuggets and pork-free sausage products. Impossible first introduced its plant-based meats at select restaurants and chicken shops, including Chicken Cottage, Halo Burger, Le Bab, MEATliquor, and Patty&Bun, before a wider rollout to 300 menus UK-wide.

“The UK has a unique and unrivaled chicken shop culture that we’re confident our nuggets will compete in because, first and foremost, they taste better, and they’re also better for you and better for the planet,” Impossible Foods new CEO Peter McGuinness said in a statement. “And there’s more to come—later this year we’ll be expanding to supermarkets and rolling out additional products. We can’t wait for our friends and fans in the UK to finally taste our products.”