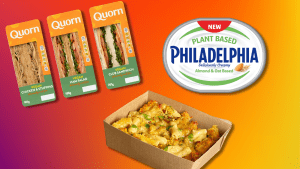 It’s now week two of Veganuary 2022. But with the annual vegan pledge aside, this month is no different in the ramping up of plant-based foods. The world keeps turning and with every spin comes a new product, menu launch, and vegan expansion.

This week, we’ve got hot news from where to get your hands on Impossible Nuggets while watching your favorite film, to releases from Quorn, M&S’s Plant Kitchen, and a first for vegan chicken in Canada.

Following the exciting launch from Impossible Foods last year that came in nugget format, the global plant-based meat giant is expanding the goods across the world’s largest movie theatre chain.

Last week, AMC Theatres welcomed the meatless alternative inside its walls. “We’ve been working for years to be able to make this announcement,” confirmed CEO Adam Aron via Twitter.

“With crispy breading on the outside, and a tender juicy bite on the inside, it’s hard to believe they are made solely from plants,” he added.

The Impossible Nuggets are launching in theaters across the US this week.

Now, the company has a whopping 175 products featuring new additions such as Lasagne, Fish Fingers, the VLT, and No Lamb Shawarma.

“Eating more sustainably needn’t be complicated or expensive – there are simple steps we can all take to reduce our impact on the planet,” a M&S nutritionist stated in a release.

Quorn releases its own line of vegan sandwiches

According to reports, they come in Club, Chicken & Stuffing, and Ham Salad.

Sandwich supplier Simply Lunch confirmed the news on social media. The partnership comes “in an effort to meet the ever-growing demand for vegan and vegetarian food-to-go meals.”

Quorn has not yet confirmed where customers will be able to buy the new offerings, however.

For the first time ever, leading soft cheese brand Philadelphia is rolling out a vegan version of its iconic spread in the UK.

As of last week, the company launched its Plant-Based Almond & Oat Soft Cheese Alternative. Mondelez, which owns Philadelphia, among Cadbury, Oreo, and more big names, confirmed the new vegan offering is “as delicious and creamy” as the original. It also features coconut oil and salt.

Customers can find the new alternative in Tesco stores for £2.50 a pot. Moreover, until January 18, Clubcard holders can purchase it for the reduced cost of £1.50.

British coffee chain Costa has launched two new vegan dishes ready to fill all your Veganuary needs. And, those signed up to its app can enjoy plant milks without the additional charge.

This is provided you scan the app when you order, and applies to coconut, oat, soy, and almond milks from the AdeZ range.

For a limited time this month, customers can try the Vegan Macaroni Cheeze and Vegan BBQ Chick’n Panini.

The panini is a returning favorite and features vegan chick’n in a Texan BBQ sauce alongside vegan cheeze, roasted peppers, and fresh spinach.

The cheezy Vegan Mac is new for 2022 and comes with a “delicate” parsley crumb.

Moreover, in partnership with vegan authors BOSH! for the second year in a row, the chain is launching a dairy-free BOSH! Chocolate & Pecan Slice.

The new dishes are now available in all of its more than 2,400 outlets.

Since gaining traction in the US, Atlas Monroe is reaching Canadian customers in the form of the Nashville Chicken Sandwich.

It will be available in plant-based restaurant chain, Copper Branch, which has more than 40 locations across the globe.

The brand is the first to have scooped the winning pitch spot courtesy of Vegan Women Summit. And, the organization says more collaborations of this kind are to come in the future.

Atlas Monroe’s co-founder Deborah Torres said in a statement sent to PBN: “For years we’ve had people asking when we were coming to Canada. We’re so excited to finally get this chance to bring our product to them in the form of this delicious sandwich. It’s truly special.”

London-based donut company, Crosstown, is venturing into chocolate for the first time. And, three of its artisan bars are vegan!

The range includes flavors in Dark Chocolate, Yuzu & Passion Fruit, and Coffee. The Dark is made from signature 72 percent chocolate, the Yuzu featuring a zesty ganache, and the Coffee made with rich espresso in coalition with Caravan Coffee Roasters.

Moreover, Crosstown co-founder Adam Wills says he is “excited to take the experience of what our customers love and apply it to chocolate.”