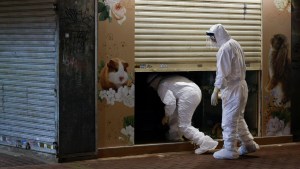 As the clutches of COVID-19 continue to claim human lives across the globe, more animals are falling victim to the virus too. Just this week, eleven hamsters were seized from a pet shop in Hong Kong amid an outbreak of the disease.

All will be killed, but the total death toll will now stretch into the thousands.

Around 2,000 other hamsters and small mammals from the store will be culled in a bid to halt the spread.

And anyone who purchased an animal from the shop within the past four weeks is ordered to hand their pet in to be killed.

According to the BBC, authorities announced the news last week after an employee at the Little Boss shop received a positive test for the Delta variant. This prompted the testing of hundreds of animals that were being kept there.

It is understood the animals contracted the virus from the worker.

Infected animals across 34 shops are to be killed as a “preventative measure.” Officials add that the animals will be killed “humanely.”

At a press conference, the director of Hong Kong’s agriculture department Leung Siu-fai called for pet owners to implore a “good hygiene practice.”

This includes washing hands after touching animals or handling their food. And, to avoid kissing them.

Thousands call for hamsters to be saved

Amid the ongoing situation, a petition has gathered wind to try and save the hamsters. At the time of writing, more than 36,100 people are calling on the government to stop the “wrongful” euthanasia.

“Every pet owner knows that their pet’s lives are just as important as their own.

“Yet, the Hong Kong government fails to see that they, the very upholders of the law, are on the dangerous path to the murders of many lives that are barely any different to ours,” it reads.

It goes on: “Just like humans, these pets could be quarantined and isolated rather than killed off mercilessly. Yet, authorities insisted on trading over 2000 lives for the sake of ‘public health needs’.”

The post 2,000 Hamsters To Be Killed Amid COVID-19 Outbreak At Hong Kong Pet Store appeared first on Plant Based News.

From marshes to meat: Reflections from a career in conservation