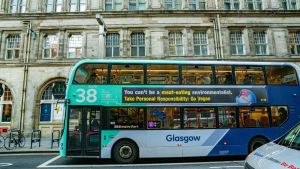 People for the Ethical Treatment of Animals (PETA) has launched a campaign aimed at the world leaders attending COP26 this year. The initiative urges them to go vegan for the sake of the planet – a message that’s sent loud and clear via the sides of half a dozen buses.

PETA, said to be the largest animal rights organization in the world, launched the campaign in Glasgow, where the United Nations’ climate change conference is being held this year. It’s the 26th event of its kind.

The advertisement will appear on buses that run through the city center, including past the Scottish Event Campus where COP26 will take place from October 31 to November 12, 2021.

“You can’t be a meat-eating environmentalist. Take Personal Responsibility: Go Vegan,” the bus ads reads. The campaign will run until November 14.

COP26 unites world leaders with the shared goal of protecting the planet from the escalating climate emergency. There, they will conjure up strategies to reduce emissions, pollution, and deforestation, for example.

But some have criticized COP26 for overlooking the food system’s impact on the planet. Animal farming practices, in particular, are resource-intensive and responsible for huge amounts of greenhouse gas emissions.

As a consequence, environmentalists have called on the conference to serve only vegan food.

However, despite promising to focus on plant-based meals, COP26’s menu still features dishes like turkey, salmon, and beef. The latter has repeatedly been identified as one of the most destructive foods to produce.

“The UN has stated that a global shift to vegan eating is necessary to combat the worst effects of climate change,” commented PETA Senior Campaigns Manager Kate Werner. “PETA’s ad blitz is a wake-up call to anyone who can look at a plate of sausage or black pudding without considering the environmental impact of these foods – or the animals who suffered for them.”

The post ‘You Can’t Be A Meat-Eating Environmentalist’ Declares New Campaign Aimed At COP26 appeared first on Plant Based News.