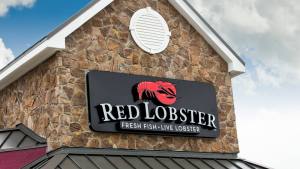 The world’s largest seafood restaurant company, Red Lobster, is entangled in a lawsuit over its sustainability claims. Consumers allege its environmental statements are “false” and “deceptive,” and have fooled diners into purchasing food they believed to be eco-friendly.

In June, consumers accused the chain of making misleading environmental claims about its Maine lobster and shrimp.

The plaintiffs took issue with some of Red Lobster’s marketing strategies, including its use of statements like “Seafood with Standards” and “Traceable. Sustainable. Responsible.”

When actually, according to the 36-page lawsuit, the company’s Maine lobster is sourced from suppliers that are placing pressure on whale populations. Specifically, the North Atlantic right whale, which is endangered.

Estimates suggest there are less than 350 of the whales remaining, with under 100 breeding females.

According to the complaint, a US district court has previously found that the Gulf of Maine lobster fishery – which supposedly supplies Red Lobster – violated the Endangered Species Act (ESA).

It concluded that the fishery “had the potential to harm the North Atlantic right whale at more than three times the sustainable rate.”

Following this, the fishery reportedly had its sustainability certification revoked.

The plaintiffs say Red Lobster chose to continue working with the supplier even after learning about its ESA violation and revoked certificate.

Further, the suit alleges that the National Marine Fisheries labeled the lobster producer a Category 1 fishery. This refers to causing “frequent mortality and serious injury of marine animals.”

Additionally, the plaintiffs state that Red Lobster’s shrimp is the product of industrial shrimp farms in China, India, Indonesia, and Vietnam.

There, shrimp farmers employ “unsustainable and inhumane high-density industrial farming methods to increase production,” the suit alleges, including the frequent overuse of antibiotics.

“The combination of organic waste, chemicals, and antibiotics from shrimp farms like these contaminate groundwater, in turn significantly reducing the size and diversity of fish populations that the ecosystems can support,” the complaint states.

“The use of harmful chemical contaminants is especially prevalent in the regions from which Red Lobster sources shrimp for the Shrimp Products.”

The suit alleges that Red Lobster has “profited enormously” from its sustainability statements, and has been able to sell more Maine lobster and shrimp because of these claims.

Moreover, the chain has been able to raise prices of such products due to consumer perception of their sustainability, it adds.

According to the plaintiffs, at least 27 dishes have been falsely advertised as sustainable.

The leading seafood chain filed a motion to dismiss the case, arguing that the plaintiffs are just “dissatisfied” with Red Lobster’s sustainability efforts.

Additionally, the chain pointed out that its menus direct diners to its website “for more information.”

To that, the plaintiffs said that patrons should not have to “look beyond misleading representations” to “discover the truth.”

As such, the accusers filed an opposition to the motion to dismiss.