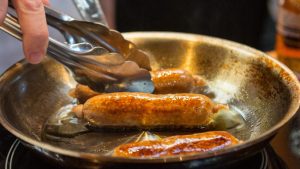 The world’s largest meat processor, JBS, has ventured into the cultured meat scene, with an investment of US $100 million.

JBS processes beef, chicken, pork and the by-products of such items. The 68-year-old company pulls in around $50 billion of revenue each year, according to its own financial reports.

But now, the public is warming to the concept of a new kind of meat: cultured, also known as cell-based, clean, or cultivated meat.

Cultured meat is produced by in vitro cell cultures of animal cells. It creates a food that is biologically the same as meat, but can be made without harming or slaughtering animals.

It can also be produced with far fewer resources than conventional meat, including land, water, and animal feed.

The industry is relatively new but already gaining momentum. Last year, at least $366 million was invested in the cultured meat sector.

Eager to keep up, JBS has acquired Spanish cultured meat company BioTech Foods. It’s the first time the food giant has stepped into the market.

JBS is also forking out $41 million to build a plant in Spain, poised to scale up production. It will also establish its first Centre for Research and Development in Biotechnology and Cultivated Protein in Brazil.

But it’s not JBS’ first foray into meat alternatives. The company operates its own plant-based food brand called Planterra, which produces meat-free burgers, grounds and meatballs.

And in April, JBS acquired plant-based meat brand Vivera Foods for €341 million. At the time, Vivera was Europe’s third-largest plant-based food producer. It’s also to thank for the “world’s first” vegan steak, which it introduced in 2018.

“This acquisition is an important step to strengthen our global plant-based protein platform,” Gilberto Tomazoni, global CEO of JBS commented. “Vivera will give JBS a stronghold in the plant-based sector, with technological knowledge and capacity for innovation.”