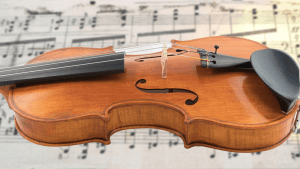 For the first time ever, a violin has received certification from The Vegan Society’s Vegan Trademark. The creator of the musical instrument – traditionally crafted with animal products – maintains that the item is more ethical and acoustically speaking, an improvement.

Irish musician Padraig O’Dubhlaoidh is behind the creation, which took years of research to complete. The violin maker’s instruments have been played at high-profile venues, including Buckingham Palace, the White House, Carnegie Hall, and the Royal Albert Hall.

Violin makers have historically used non-vegan materials in their designs, such as animal hide glue, derived from the skin, bones, and tendons of animals. It is typically sourced from horses but rabbits, fish, and other species can be used too.

But O’Dubhlaoidh is insistent that animal body parts are not needed to create the instrument. The musician stayed true to the traditional tools and methods used in violin production, but with some modern twists of his own.

For instance, to develop the purfling decoration that wraps around the instrument’s edges, he used wild berries and spring water sourced from beneath the granite of the Malvern Hills in the UK, where O’Dubhlaoidh lives.

Although animal-free strings and bows do exist, they are not currently registered with the Vegan Trademark.

O’Dubhlaoidh explained the process in a statement sent to PBN.

“I learned a lot about my craft during years of research and ultimately, it was the science of conservation that brought about a series of breakthroughs leading to success. During my experiments, I also discovered that there are unforeseen advantages to a vegan violin.

“Apart from the benefit to animals, society, and our environment, it has become very clear that animal-based glues have harmful effects on violins, inducing powerful tensions on wooden components. The adhesive used in my vegan violins however, has no such effect. Irrespective of ethics, this is an acoustic improvement.

“With our planet facing crises on almost every front, the collective voice of people wanting a fairer future grows stronger every day. Ethical musicians are part of this movement and have long wished for a violin that is fully vegan yet retains all the qualities of the classic instrument.”

“It’s incredibly exciting to have the world’s first vegan violin registered with the Vegan Trademark. This will be music to the ears of so many violinists who have longed for a high-quality instrument that is free from animal products,” they said in a statement.

“Every violin is also completely bespoke with the sound and feel tailored to the player’s individual style and preference. Padraig has done a fantastic job and we’re extremely proud of what he has produced.”

To learn more about the vegan violin, see O’Dubhlaoidh’s website.