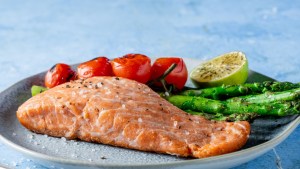 The once-niche vegan and vegetarian food scene is now rich with options. Gone are the days when meat-free steak was an oxymoron. Today, consumers can get their hands on everything from dairy-free ice cream to meaty plant-based burgers. And now, thanks to Israeli start-up Plantish, vegan whole-cut salmon fillets are joining the ranks too.

For a company just six months old, Plantish has achieved a lot. The food tech start-up has already netted $2 million from TechAviv Founder Partners, a venture fund supported by some of the industry’s key players. This includes 33 unicorn founders as well as angel investors, like Michelin chef José Andrés, and vlogger Nuseir Yassin (aka Nas Daily), who has 20 million followers on Facebook.

Driven by an unwavering commitment to reviving our oceans, Plantish will use the funds to further develop its versatile, patent-pending additive manufacturing technology.

It’s this technology that allows the company to produce realistic plant-based fish alternatives at low cost and on a large scale, making it more accessible to the foodservice, restaurant, and retail sectors.

Plantish’s boneless salmon fillet is made from legume proteins and algae extracts. Yet it mirrors conventional cooked salmon in appearance, taste, texture, and structure. It’s the latter that has kept food producers from perfecting vegan seafood thus far. But with an experienced team at the helm –  including serial entrepreneurs, bioengineering and chemistry PhDs, and foodtech executives – the company came through.

The product’s structure is particularly relevant, given that a vast majority of fish sold is whole-cut (with estimations as high as 80 percent). Yet, the alternative seafood field is crowded with minced plant-based fish options due to technical constraints.

Plantish’s whole-cut fillet boasts the same nutritional value of animal-based salmon, and is high in protein, omega-3s, omega-6s, and B vitamins. But unlike a great deal of farmed or wild salmon, Plantish’s version is free from mercury, antibiotics, hormones, microplastics, and other toxins. Further, the company’s current prototype can be cooked in all the same ways its animal-based counterpart is prepared.

Plantish’s significantly rapid growth can be attributed, in part, to the team’s shared mission.

Ofek Ron, co-founder and CEO of Plantish, explained: “We exist to save the oceans and eliminate the need to consume marine animals by providing more sustainable, more nutritious, and more delicious fish options.

“Our vision is to be the world’s leading seafood brand, all without hurting a single fish.”

It’s an ambitious pursuit, given that the global seafood market is worth $586 billion, according to market research firm IMARC Group. And notably, salmon makes up $50 billion of this figure.

But there’s never been a better time to rival the industry. More than 90 percent of the world’s marine fish stocks are already overfished. And with the global population expected to hit nearly 10 billion by 2050, it’s becoming clear that today’s fishing industry is unsustainable.

Last year, a first-of-its-kind study concluded that bottom trawling – a process used to catch massive amounts of fish – releases as much carbon as the air travel industry.

Meanwhile, seafood production has been blamed for excessive amounts of pollution, as well as habitat degradation and species loss.

For this reason, among others, Plantish – a net-zero carbon emissions company – maintains that “plants make the best fish.”

“We are driven by the Plantish way,” the start-up writes on its website, “all of us share the same vision and passion and know that only if we work together, we will change the world.”

Plantish Salmon will be launching in select pop-up locations by the end of the year. Its official launch is slated for 2024. For more information, see Plantish’s website.