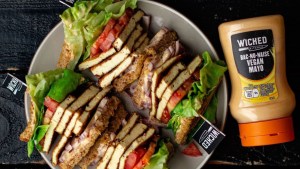 A new partnership with Finnish grocer S Group (SOK) means new customers will be able to pick up Wicked Kitchen’s convenient plant-based meals across the country.

Plans to launch in Asia before the end of this year, starting in Thailand, have also been confirmed.

In addition, some of its 100 percent plant-based products will be available via Amazon from next month.

Chefs and brothers, Derek and Chad Sarno, founded the company in 2012 with a philosophy to create delicious plant-based food that appeals to vegans and meat-eaters alike.

Derek Sarno said, “We put taste front and center while offering peace of mind that there are no animal products used, ever.”

The company launched in UK supermarket chain Tesco in 2018 and became a pioneer in the multi-category, plant-based space.

It expanded into the US last year and 2022 is tipped to be another year of international growth for the vegan brand.

However, it’s not only geographic expansion that’s creating rapid growth.

Company ceo, Pete Speranza said: “By launching additional products where we already have a presence and expanding into new markets we will continue to grow our range of delicious options to help meet the burgeoning demand for variety and flavor in plant-based foods.”

In the US, its product range will increase by 50 percent across multiple categories in Kroger and Sprouts stores nationwide.

New products launching in America include a first-of-its-kind plant-based ice cream made with lupin bean base, frozen pizza, and heat-and-eat entrées.

Growth into new channels in the UK is also on the horizon with 30 new products in the pipeline including fresh ready-to-eat meals and chocolates for Easter.