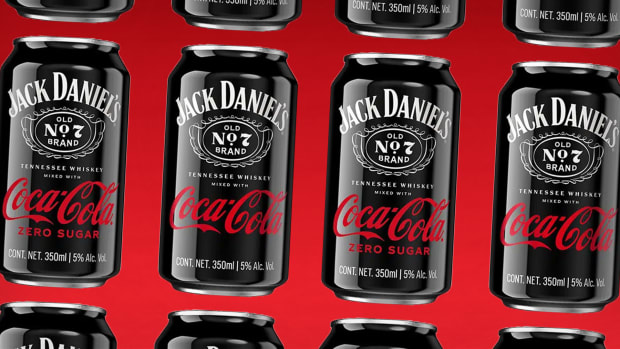 Once limited to a few options at the back of the liquor store, canned cocktails have exploded onto the market with everything from those made by independent artisans to Guinness' breakfast beer and Jack Daniels' and Coca-Cola  (KO) - Get Coca-Cola Company (The) Report's canned whiskey-and-cola collaboration.

With a projected CAGR rate of 13.4% between 2022 and 2030, what are also sometimes called "ready-to-drink cocktails" are the industry's fastest-growing segment.

The canned cocktail market was valued at $782.8 million in 2021, according to analytics company Grand View Research.

Coca-Cola is one of several major brands currently trying to carve out a space in this market. In the last year, it launched alcoholic Topo Chico, hard Fresca and alcoholic seltzers in partnership with its Simply juice brand.

This doesn't mean that the company is abandoning its signature drink, which far outstrips anything else the company makes as its best-selling product.

"[Coke is] a huge share of the beverage industry, clear gold medalist, far exceeds any other in that," chief executive James Quincey said at the Barclays Consumer Staples Conference earlier this month. "Then you got the silver medal, if you like, where we are No. 2 or No. 1, but we're not a distant No. 1 as we might be with Coke."

Alcohol, meanwhile, is in the "true experimentation bucket." In other words, this means the company pumps out different drinks and sees what takes off and brings in sales.

One of the more unusual alcoholic drinks is the Lemon-Dou cocktail that Coca-Cola launched in Japan in 2018. The pre-mixed drink of citrus-flavored soda and the local shochu rice spirit that, due to the differing global tastes, would be unlikely to sell well in the United States.

"We are strategically experimenting and learning in alcohol," Khalil Younes, who leads Coca-Cola's emerging alcohol category, said in June. "We are excited about the opportunities, but we also know it will require effort and patience."

Coca-Cola previously cited data saying that adult alternative beverage is expected to become an $8-billion industry in the next three years but during that period some will drinks will inevitably become new favorites while others will flop and be relegated to the "remember when?" internet round-ups.

The company also partners with MolsonCoors  (TAP.A) - Get Molson Coors Beverage Company Brewing Company Class A Report, which launched a much-criticized light alcoholic pre-made cocktail that marketed it with "healthy" buzzwords such as "antioxidant" and "Vitamin C."

Ready-to-drink cocktails have exploded in popularity due to a combination of factors  — they are easy to transport while their relatively low alcohol content (typically no more than 8%) make them a popular choice for those looking to have something without purchasing an entire bottle.

But while we are likely see many more "experiments" in the coming year, alcoholic beverages are destined to remain a side product that Coca-Cola offers to stay on top of trends and be diverse in terms of offering.

But soft drinks are, for the foreseeable company, will be what determines the fate of the company.