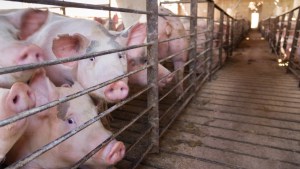 Californian restaurants and grocers are trying to block a new animal welfare law over fears it could make pork and bacon either more expensive or unavailable.

Proposition 12, dubbed colloquially as ‘bacon law’, was accepted by the state of California back in 2018. In short, it ensures farmers give chickens, cows, and pigs more space in animal agriculture systems.

But now, a coalition of outlets in the region have filed a lawsuit. This is the latest in a three-year fight to maintain current regulations, at the cost of animals trapped in factory farming.

Wider backlash has been especially vociferous from the pig farming industry, of which key proponents have filed several lawsuits in response to Proposition 12. However, all have been unsuccessful so far.

According to NBC News, many pork producers have not made necessary changes to fit the new regulations. The reaction from egg and veal producers has been more positive – which has largely been put down to it being more affordable.

For pigs, Proposition 12 calls for at least 24 square feet of space for breeding. This is an increase of eight feet per pig, which many campaigners say provides barely enough room to turn around.

A spokesperson for the California Grocers Association told the outlet the law “is not going to work.”

But animal rights advocates disagree. Speaking for the Humane Society of the United States, Josh Balk affirmed that Californian residents should not fear the industry’s “claims of the apocalypse.”

It’s “hard to see” how the pork industry can make the necessary changes by next month, NBC News claimed.

But Californian law is standing by its calls, since votes to approve it passed over two years ago.

The post Why Californian Restaurants Are Blocking Plans For Pigs To Have More Space On Farms appeared first on Plant Based News.