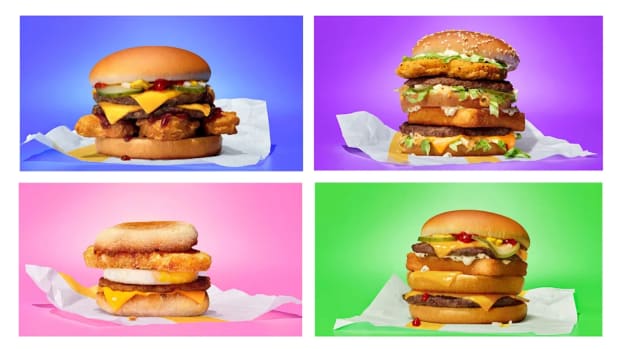 Menu-hacking fans may know this one.

It's this latter group that's responsible for the invention of menu hacks, which is when you ask for your order to be modified in an unusual way, like a Big Mac with a fried chicken patty added on, or stuffing french fries inside a breakfast burrito.

People who do this also like to take photos of their creations and post them to social media. At some point, the folks at McDonald's  (MCD) - Get McDonald's Corporation Report caught wind of this, and the next thing you know, menu hacks were suddenly an official thing you could order.

While its customers certainly appreciated the recognition of their efforts, there were many hacks that McDonald's naturally did not add to its official menu-hack list.

One of those was a Frankenstein's-monster-inspired creation called the McNasty (it has another nickname as well, but it's not one we'd mention in polite company).

What Is the McDonald's McNasty?

This fan-named creation is a fairly simply combination, and while you can't order it and get it delivered in one package, you can easily assemble it from the comfort of your car.

Simply order a McDouble and a Spicy McChicken from the dollar menu, open both, and insert the entire McChicken (yes, bun and all) in the middle of the McDouble. Or if you really want to live dangerously, put the McDouble inside the McChicken. Whoa!

All jokes aside, the resulting sandwich is not quite as large as the Surf n' Turf McDonald's added to its official menu hacks list, but it is...big.

Eating it will add 800 calories to your diet, which seems like less than a tower of meat and bread should be.

If that doesn't sound appealing to you, perhaps you should try one of the others that have gained in popularity among the menu-hacking elite.

A few of those include the Mc10:35, which is an Egg McMuffin with a McDouble stuffed inside it. Sadly, many McDonald's location no longer offer all-day breakfast, so creating this combination requires showing up between 10:30 and 11 a.m. to ensure you catch it before the lunch changeover happens (hence the 10:35 in the name).

If you're especially hungry, the McKinley Mac is basically just a Big Mac that has two quarter-pound patties instead of the 1.6-ounce ones it typically comes with. McDonald's employees will actually assemble this one for you if you ask for it, or if you get lucky, they might even know it by name already.

And if you still have room for dessert, one popular menu hack people really like is the Neapolitan shake. This is as simple as asking for a milkshake with all the available flavors (vanilla, chocolate, and strawberry) mixed.

And if none of this quite appeals to you but you have an idea to mix up the menu in a brand new way, hey -- dream up your own. That's what the menu-hack spirit is all about.