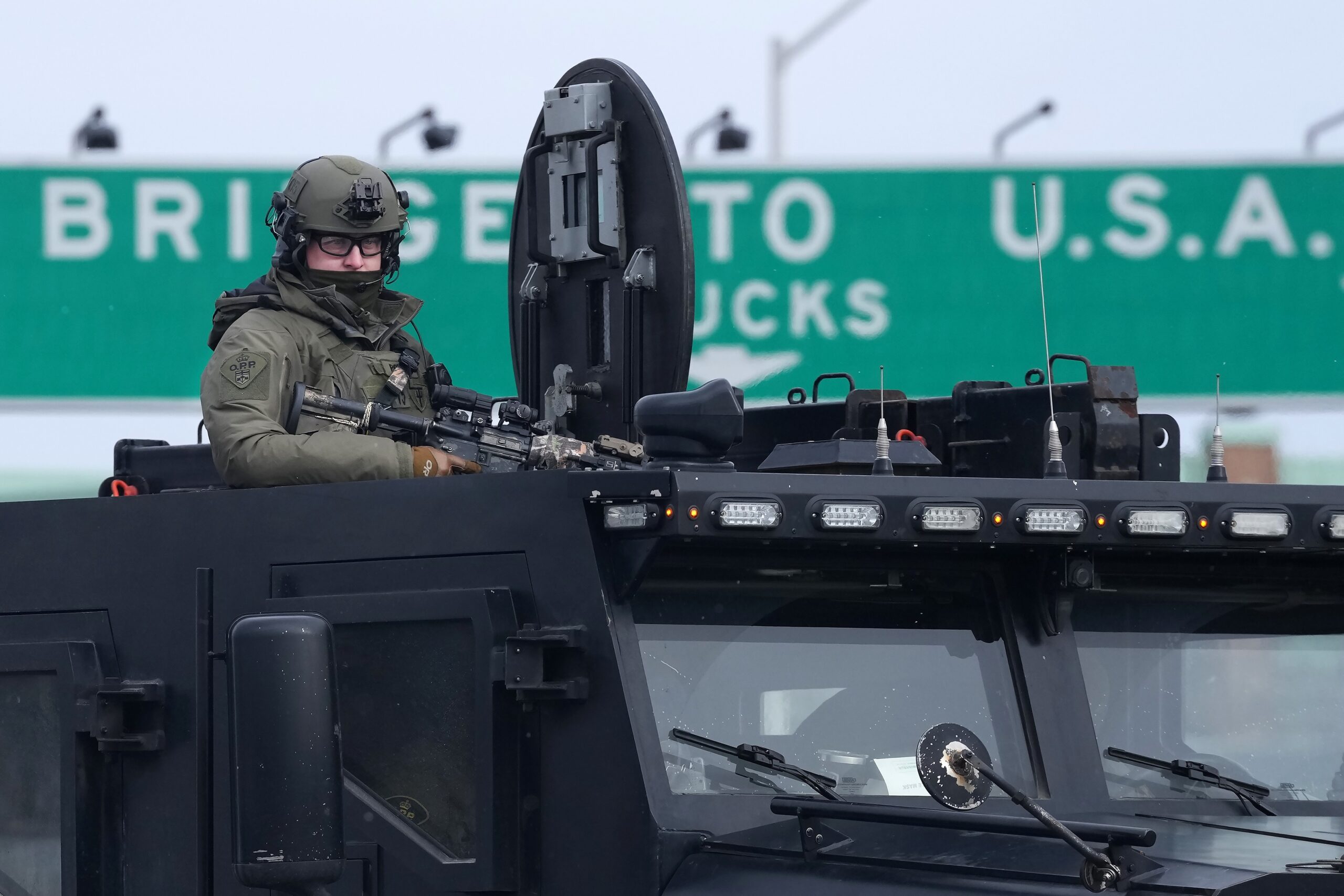 Trade between Canada and the United States is now being hampered by the blockade of the Ambassador Bridge at the Windsor-Detroit border as part of the so-called freedom convoy protest.

Although a court injunction was secured to end the blockade , the protesters remain and the bridge is still blocked.

There are increasing tensions in other parts of Canada, and similar blockades are likely to emerge, including at the Peace Bridge in the Niagara region. The movement has also gone international.

Ontario Premier Doug Ford has declared a state of emergency aimed partly at the blockade at the Ambassador Bridge, one of the busiest bridges in North America and the No. 1 international border crossing in terms of trade volume and people each day.

Ford has introduced heavy fines of up to $100,000, the confiscation of vehicles and the possibility of up to a year in prison for anyone blocking border crossings, 400-series highways, airports, ports, railways and pedestrian walkways.

Yet few arrests have been made at the bridge, which accounts for nearly 30 per cent of annual trade between Canada and the U.S., amounting to a trade value of US$323 million daily. The bridge is used by more than 40,000 commuters, tourists and truck drivers crossing each day.

Because of trade tensions between the U.S. and Canada in recent years, the blockade is particularly concerning because it prolongs those tensions.

Former U.S. president Donald Trump created trade uncertainty during the renegotiation of NAFTA that almost led to the collapse of the only free-trade agreement in North America.

In addition, the Trump administration imposed tariffs on Canadian steel and aluminum in 2018, forcing Canada to impose retaliatory tariffs on agri-food products from the U.S.

Read more: How Trump's tariffs are much bigger than Trump

Since the Trump years, the COVID-19 pandemic has disrupted bilateral trade between the two countries because of border closures and ban of international travel at the peak of the pandemic.

Bilateral trade is highly sensitive to these types of disruptions as businesses factor such risk and uncertainty into cross-border trading decisions. If the risk they are exposed to is substantial, businesses are hesitant to engage in international trade.

The blockade and increased trade costs

Canada and the U.S. are natural trading partners by virtue of a shared border and similar consumer tastes and values. The two countries enjoy the largest bilateral trading relationship in the world.

Annually, more than two-thirds of the US$511 billion in goods are transported by road. The Ambassador Bridge blockade increases the costs of this trade directly and indirectly.

The blockade is a direct disruption of an established trade channel, so goods scheduled to be transported have to wait or use alternative routes that are likely more expensive.

Indirectly, it could also stir uncertainty in bilateral trade relations and have a damaging and prolonged impact. The blockade acts as an additional tariff or tax for businesses exporting or importing between the two countries.

Although there are more than 100 alternative land border crossings between the U.S. and Canada, costs will rise due to the expense and sometimes long delays spent determining and travelling to alternative routes.

The protests may also spill over to other U.S.-Canada border crossings that provide alternative routes. Already, Canadian protesters have caused border closures at Emerson, Man. and Coutts, Alta.

A major alternative to land cross-border trade is seaport and air freight trade.

However, changing trade logistics from roads to ships is not an option for many companies or industries, and it’s often infeasible due to the lack of refrigerating systems in containers.

Bilateral trade via ground shipping is also more economical compared to air freight, especially if countries share a common border and have an interconnected road network.

For highly perishable agricultural products like fresh fish or fruits, a higher shipment frequency is more important due to the importance of delivery time whereas size or volume is more important for traditional product shipments, since bigger deliveries can reduce transportation costs.

The U.S. and Canada have established the most enduring and lucrative trade partnership in the world. As of 2019, Canada was the largest export destination of American goods and the third-largest supplier of imported goods in the U.S.

Among all other traded goods, agricultural and food trade is of great importance. Canada is the second-largest U.S. agricultural export market, importing up to US$22.1 billion amount goods in 2020.

Highly integrated supply chains and logistical advantages allow both countries to be strong trade partners in agri-food trade by ensuring the timely delivery of fresh foods and retail-ready goods.

Geographically, the blockade is likely to have a bigger impact on U.S. farming states with economies that are highly dependent on exporting to Canada, including North Dakota, Michigan, Ohio, Oregon, South Dakota and Montana.

Similarly, Canadian provinces such as Prince Edward Island, Manitoba and Saskatchewan that are somewhat more dependent on primary or non-processed agri-food products, including grains, will also suffer heavily from the blockade.

The automobile industry across the U.S. and Canada is already feeling the brunt of the protest as major producers such as Toyota, Ford and General Motors are closing down production plants. The auto industry sector in Canada and the U.S. is highly dependent on the North American supply chain in which different auto parts are produced across borders.

Already, the auto industry is expressing concern about potential job losses as a result of plants closures if the blockade continues..

Rising inflation in Canada and the U.S., triggered mostly by COVID-19 and climate change disruptions to supply chains, makes the Ambassador Bridge blockade a major concern.

If not addressed speedily, the blockade will cause food prices to soar even higher given the rise in general inflation is already expected to significantly impact food prices.

It may appear that the blockade is purely a Canadian political issue, but since it constitutes a barrier to two-way trade between the U.S. and Canada, it has implications for both countries. The integrated supply chain across both countries will be disrupted.

That’s why the U.S. has offered its assistance in ending the blockade at the Ambassador Bridge.

The Canadian government needs to work with the U.S. to end the blockade, particularly since Canadian protesters are being supported politically and financially by right-wing politicians and media in the U.S.