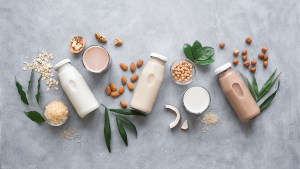 Vegan milk sales are on the rise while dairy stays stagnate, but which is the healthiest plant-based milk out there?

A study published in the PMC back in 2017 titled ‘How well do plant-based alternatives fare nutritionally compared to cow’s milk?’ assessed four types of plant-based milk: almond, coconut, soy, and rice milk.

It found that rice and coconut milk ‘cannot act as an ideal alternative for cow’s milk because of limited nutrient diversity’. But, are options for those allergic to soy or nuts.

The study also said almond milk has a ‘balanced nutrient profile’ but the’ nutrient density and the total number of calories are not as rich as that of cow’s milk’.

It, therefore, warns those consuming almond milk to make sure ‘various essential nutrients are available through other sources in the diet in appropriate quantities’.

Soy was crowned the overall winner for being ‘very rich in proteins and fat’, as well as its health benefits which are ‘primarily attributed to the presence of isoflavones which are linked to exhibit anti-cancer properties’.

Researchers’ only criticism of soy was its ‘beany’ flavor which it describes as a ‘major hurdle’ in encouraging consumers to ditch dairy.

More recently, soy has come under scrutiny for its environmental impact, though it’s worth noting that almost 80 percent of the world’s soy is grown to feed livestock.

What plant-based milk do experts recommend?

In a recent video with Plant Based Science London, Dr. Greger states: “I encourage people to drink unsweetened soy milk, which is the healthiest milk out there. Of course, you don’t have to drink any milk at all… If you put it on Fruit Loops it doesn’t matter what kind of milk, it’s all bad.

“But if you’re using that milk to moisten your oat groats in the morning. Well, then unsweetened soy is probably the best.”

You can read the full study here

The post What Is The Healthiest Plant-Based Milk? appeared first on Plant Based News.