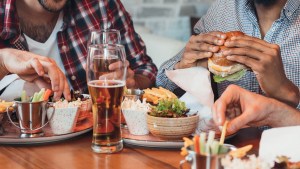 A country pub in South Wales is abandoning meat and dairy to divert to veganism for the whole month of January.

This is part of Veganuary 2022, which is a monthly pledge program aimed at helping people go vegan for 31 days and beyond.

The Queen Inn in Cwmbran is offering an entirely plant-based menu since the pub’s owners discovered the marveled effects of joining the movement.

Gareth and Jane Edwards have held the pub for more than a decade with their son Ryan. When both Ryan and Jane went vegan a year ago, they noticed “incredible effects” on their health.

It even led Ryan to run his first marathon, the 24-year-old told Wales Online.

Following Veganuary, the pub will continue to offer a menu that is at least 50 percent vegan.

“The vegan community is growing massively and they deserve a lot more than just a few options on a pub’s menu. Our vegan options have grown a lot this year.”

“…We’re on track to have an insanely busy January, as we’ve had more bookings for the month than ever before in our 17 years’ experience.”

The new menu will see a vegan chicken madras, enchiladas, and a breakfast burger.

As of tomorrow, many people around the globe will be giving veganism a go as part of Veganuary 2022.

Businesses such as The Queen Inn are ramping up plant-based offerings to support this, alongside key experts and celebrities.

This coming year, the program is celebrating continued expansion. Now, campaign hubs exist in the US, UK, Germany, Chile, Brazil, Argentina, and India.