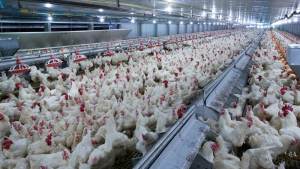 A new report has exposed the major US retailers that are lagging behind in terms of chicken welfare. Walmart, Target, and ALDI are among those that have failed to publish “meaningful” animal welfare policies for chickens raised for meat (called broilers).

Mercy For Animals, a non-profit striving to end animal exploitation in the food system, published the report yesterday.

The charity collated information from leading retailers to better understand the conditions faced by the billions of birds being raised for food across the US. This includes the amount of light and enrichments provided for birds, how much space each animal receives, and the processes used for slaughter, among other factors.

Some companies, like Sprouts Farmers Market and Whole Foods Market, have adopted the Better Chicken Commitment (BCC). The welfare policy stipulates that for every 1,000 birds, at least two meters of usable perch space must be provided.

Further, cages or multi-tier systems cannot be used, and suppliers must comply with all EU animal welfare laws and regulations, regardless of which country they produce in.

But not all retailers have stepped up. Many of the country’s leading supermarkets have fallen flat by not publishing broiler welfare policies that “meaningfully address the most critical welfare concerns,” the report says.

“Of companies with published policies at all, standards fall short of those of the BCC. They have failed to ban practices that promote the greatest suffering in their broiler chicken supply chains,” it adds.

The following retailers were identified as lagging:

Every year, more than nine billion chickens are killed for their meat in the country – more than any other land animal used for food, according to Mercy For Animals.

“Standard practices in the chicken industry would shock most consumers,” the report reads.

The “overwhelming majority” of broilers in the US have been “aggressively bred for rapid growth,” it adds. This often leads to organ stress, heart disease, and immobility.

“Birds live crowded together in sheds on waste-soaked litter, which leads to ammonia burns and respiratory problems. They are killed at five to seven weeks of age, typically through live-shackle slaughter, a method whereby chickens are shackled upside down while fully conscious and dragged through electrified water,” the report explains.

Leah Garcés, president of Mercy For Animals, called on companies to do more to improve animal welfare.

“Kroger and Albertsons, the country’s two largest supermarket companies, have begun making meaningful progress on key chicken welfare issues. But others—such as Target, ALDI, and Winn-Dixie—have failed to take action to prohibit the worst practices and reduce suffering for the chickens in their supply chains,” Garcés said in a statement.

“Retailers know people care about animals,” they added. “By adopting the standards of the Better Chicken Commitment, grocery stores and supermarkets can address growing consumer concern for how animals are raised and slaughtered.”

However, some animal advocates argue that there is no humane way to slaughter animals. As such, concerns about animal welfare have moved a growing number of people to adopt a plant-based diet.

Earlier this year, the Veganuary campaign attracted more participants than ever before. Nearly 600,000 people from 2019 countries signed up to the 31-day vegan eating challenge. Animal welfare was identified as the top reason for those taking the pledge, with 46 percent of participants citing it as such.