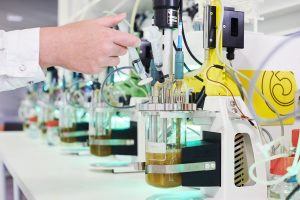 Biotin, also known as vitamin B7, is a coenzyme for the metabolism of proteins, fats and carbohydrates. The European Food Safety Authority (EFSA) attributes health-promoting effects, so-called health claims, to biotin. Seven health claims have been defined. For example, biotin contributes to normal functioning of the nervous system and macronutrient metabolisms as well as to the maintenance of normal skin and hair.

Demand for biotin, which is also used as a dietary supplement, is rising sharply, driven by the megatrends in health and well-being, notes Wacker citing a recent study that predicts growth of around 10 percent per year in the coming years, while the company also points out that the biotin currently available on the market is synthetically produced from non-renewable petrochemicals.

Wacker and Biosyntia will jointly develop a large-scale biotin production process based on sustainable fermentation. The companies report that they are dedicating considerable R&D resources in a multi-year program, which will build on Biosyntia’s biotin technology. Only plant-based raw materials will be used in fermentative production. “Demand for more natural products is increasing and with it the need for companies to use ingredients that are sustainable. Producing active ingredients from advanced fermentation is the future of production,” says Martin Plambech, CEO of Biosyntia.