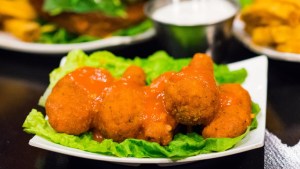 Popular chicken eatery Wing King says that up to 40 percent of its business comes from vegan chicken wing sales. Wing King was named one of the best wing restaurants in Las Vegas. Thrillist ranked it in the top 20 in the United States.

The rising cost of processing chicken meat motivated Wing King to look for new ways to draw in customers. The company now offers non-GMO, soy-based vegan wings in flavors like hot Buffalo, Cajun, garlic, and lemon pepper. The plant-based wings even include a bamboo ‘bone’ to make them more realistic. They are fried in separate oil to the meat-based version to avoid cross-contamination. On its Instagram account, Wing King said the vegan wings are ‘immensely popular’ and often sell out. Wing King also offers vegan pizza with dairy-free cheese and Beyond Meat burgers. Chef Brian Peace spoke to KTNV Las Vegas about the restaurant’s menu. He revealed that vegan wings make up 35 to 40 percent of his business. “We are not like other wing restaurants,” he said. Peace added that he relies on the profit margins of these options, as well as CBD-infused wings, to make up for the money he’s losing on chicken. “Without it, I don’t know if we would be in business,” he said.