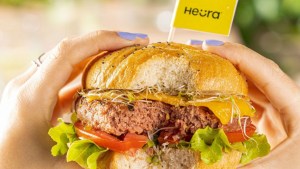 A key figure within the growing vegan meat brand, Heura Foods, has hit out at COP26 organizers, branding it “irresponsible” to serve beef at the event.

And in an impassioned speech at the UN climate crisis summit this week, he deplored organizers for not centralizing meat consumption in the debate.

“Animal meat is obsolete. It doesn’t make any sense in this century, it’s out,” he said.

But despite that, the food industry is one of the only global sectors that hasn’t evolved by taking meat off the table. In fact, it’s worse because of how we treat animals, he added.

Martinez added: “That’s why it’s very surprising at COP26 that we aren’t debating this. That’s one of the main topics…food should be at the very center.

“It is very irresponsible that beef is served at this restaurant, it doesn’t make any sense.”

“Could you imagine going to a cancer conference and giving cigarettes out? It would not make any sense. We’re at a climate emergency conference!”

Heura Foods is a Spanish vegan meat brand that holds the mission of transforming the current food system by making it more sustainable and healthy.

The “tool” is plant-based meat, and all we need to do is make it more available, according to Martinez.

He ended his speech at COP26 by saying: “We vote three times a day, us humans and we can decide which impact we have on the world.

“We have enough information to start to move forward to have a plant-based diet and have a better world for animals, the planet, and ourselves. So let’s move forward.”

The post Vegan Meat Boss Hits Out At COP26 For ‘Irresponsibly’ Serving Beef appeared first on Plant Based News.