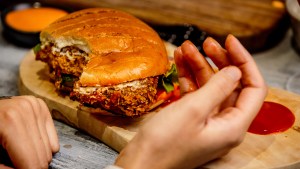 A vegan fried chick*n brand has spared more than 10,000 chickens as demand for its products continues to soar.

Its plant-based chicken, made from wheat protein, is said to look, taste, and ‘pull apart’ like chicken. Moreover, its products are all soya- and nut-free.

Last year, VFC launched a website to track the number of chickens its products have saved. At the time of writing, VFC has spared a staggering 10,084 chickens.

“The target slaughter weight for a broiler chicken in the UK is 2–2.5kg, with 1–1.5kg of each bird’s carcass being edible,” Glover wrote.

“For the purposes of our calculator, one chicken’s life saved is equivalent to every 1.5kg of vegan fried chick*n we sell.

It has also added a night shift to its factory to increase production, after witnessing ‘phenomenal’ demand.

VFC says it tracks the number of chickens spared because it ‘cares’ about animals.

“Sparing their suffering is the main reason we set up the company,” Glover added.

“‘Sparing lives’ is probably a better term to use. The chickens in factory farms today are not going to be saved by VFC, or any other company or campaign tackling this issue.

“What we’re trying to do is provide people with an alternative to chicken, so that we help reduce the demand and spare chickens in the future from the misery of factory farming.”

Moreover, the Harry Potter star penned a blog post about the experience, which she described as ‘overwhelming’ and ‘chaotic’.

“We stop and pause once through the door to look out at 25,000 chickens crammed together under one roof,” she writes.

“You have to: it’s overwhelming. It’s chaos. So many bodies squashed together in one space, with no crates, no boxes, no shelter, no chance of a momentary reprieve from the utter havoc of thousands and thousands of scared, squawking chickens trampling all over one another.

“It’s impossible to fathom that each of these white feathered bodies are individuals. But, look closer and you will see that they are.

“By my foot, one little chicken is pecking around my shoe eagerly, apparently oblivious to the danger my kind pose.

“Another is attempting to preen his wing feathers even as his underside is soiled in feces, maybe the saddest display of optimism I’ve seen all year.”

You can buy VFC’s plant-based fried chicken here. Use code PBN10 for 10% off

*This is a paid-for advertorial