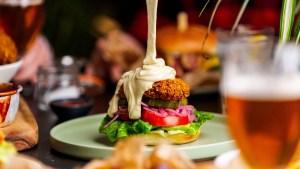 Vegan fried chicken start-up VFC Foods has netted £7.5 million (US$10.3 million) in a recent seed round. The plant-based meat company plans to use the injection of funds to scale up production, and is eyeing international markets.

Veg Capital led the recent seed round. The specialized investment fund aims to elevate companies working to free animals from the food chain. It also donates all profits to animal charities.

Veg Capital’s interest in VFC is apt, given the vegan food company’s own vision. In its 13 months of operation, VFC has already helped spare the lives of 60,000 birds.

VFC secured its first major listing in October, when all three of its products debuted at Tesco, the UK’s largest supermarket chain.

The products have been a hit thus far, according to VFC’s commercial director, Stewart McGuckin.

They commented: “The reception from both customers and consumers has been incredible, and the successful Tesco launch has allowed us to secure listings in more of the UK’s top four grocers, as well as the largest food service wholesalers.

“Expansion within the UK has been phenomenal, and we are also seeing strong international demand, particularly from the US.”

Investors are keen to keep up with the company’s momentum.

“There has been huge interest from investors and we’re very grateful for that,” VFC co-founder Matthew Glover said in a statement. “By working with Veg Capital we’ve been able to focus purely on scaling the business as fast as possible to take advantage of the opportunity.”

Veg Capital previously helped VFC raise £3 million in pre-seed funding. Further, a larger Series A round is slated for mid-2023, with the view of attracting new investors.

Adam Lyons – VFC’s co-founder, chef, and COO – is hopeful about the coming months, but acknowledges there is still work to be done.

“Our recent poll revealed that more than two thirds of people would be willing to trade meat from animals for plant-based meat if it tasted as good. That’s very encouraging for our mission. Already, we’ve spared 60,000 birds but, as that is just the number of animals crammed inside two sheds, we have a long way to go,” Lyons explained.

“Still, we have an incredibly driven team, all 100 percent committed to doing good in this world, and we are determined to play our part in ending the suffering of animals in factory farms.”