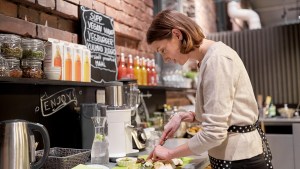 A vegan café has received a ‘torrent’ of online abuse, including violent threats, for serving an exclusively vegan menu.

Caffi Clwedog, located in Wales, says its menu is carefully selected to be as ‘sustainable and environmentally friendly as possible’.

It serves a range of plant-based dishes including Bean Burgers, Burritos, and Clywedog Flapjacks, as well as a selection of plant milks for hot drinks.

However, the eatery has been subject to mass backlash after farmer Gareth Wyn Jones posted a picture of its menu online.

He wrote on Facebook: “Is this Caffi just using plant-based fluids and not using natural local milk?”

At the time of writing, the post has garnered nearly 2,000 comments. These includes abusive remarks including an alleged threat of arson.

Caffi Clywedog has responded to the furor with a public statement declaring ‘let’s be kind’.

It reads: “We would firstly like to thank the public who have supported us and sent kind messages, after we received a torrent of negativity which included online threats for offering a plant-based menu.

“In a time where small hospitality has had a hard enough time as it is, we were saddened to receive a surge of unexpected, online abuse.

“Although we respect that people can all have different views… We cannot accept are threats of violence and arson to our premises, and messages of hatred that have been sent to Caffi Clywedog, which has promoting well-being within our community at the heart of everything we do.

“We’re committed to our work at Clywedog to promote positive well-being, and will continue to serve members of the public, as well as helping the vulnerable in our community.

“We’re proud to support social prescribing creativity classes which are a lifeline for those around us. This includes ex-servicemen and women who suffer from severe PTSD, the elderly who are suffering from loneliness, and those with mental health issues.

“We will continue to be part of the Clywedog community, promoting tourism and leisure in Wales.

“It’s our choice to provide, fresh plant-based refreshments to those who want them, without forcing our personal ethics onto people, we trust our potential customers are intelligent, and capable of making their own decisions.”

Moreover, Jones’ post has also received a slew of positive comments from both vegan and non-vegans.

One social media user wrote: “It’s a vegan café. The cakes are delicious and the owner is very friendly and chatty.”

Another person said: “Thanks so much for bringing this place to my attention. I visit West Wales often, and I love discovering new vegan eateries. I’ll be making the trip there next time I’m in Aber.

“People who don’t like what they serve are free to go to pretty much any other cafe… The same way I don’t go to steakhouses then complain they don’t offer what I want to eat.”