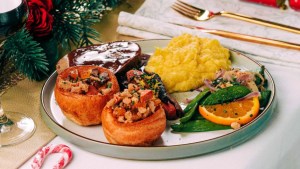 A vegan butcher has come under fire for sales of a luxury Christmas dinner package.

The Rudy’s Vegan Butcher price tag gained traction with some arguing that £79 is a price too hefty.

Dubbed the country’s first vegan butcher, Rudy’s is based in Islington, London, and is also home to a diner.

When the launch of its Christmas box circulated in the news, several publications took aim at the firm, comparing it to other vegan meat packages sold in top UK supermarkets, another deploring it for costing “a pretty penny.”

Rudy’s Royal Christmas Meat Feast Box contains a complete roast dinner and all the trimmings, from slow-cooked cabbage and Yorkshire puddings to the main event, its famous Christmas Turk’y for two.

Also inside is vegan “peegs” in blanket, a stuffing made from chestnuts and mixed nuts, and sprouts served with vegan “baycon.”

The Independent notes that the box is “significantly pricier” than most Christmas dinners sold at the country’s supermarkets. For example, it’s £35 at Tesco and just £16.85 at Asda.

But Rudy’s also sells a standard Christmas Meat Feat Box at the reduced rate of £55.

And, according to the one review left on Rudy’s website, the Royal price tag is worth it, a customer claiming “everything was so perfect.”

The post Vegan Butcher Under Fire For £79 Price Tag On Luxury Christmas Box appeared first on Plant Based News.