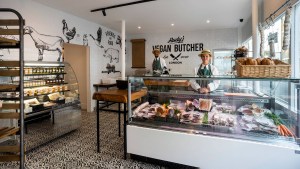 A vegan butcher is opening a second location inside Selfridges.

“For the first week, to celebrate, we are giving one of our official Vegan Butcher Tote-bags with any purchase,” Rudy’s wrote on Instagram.

“Come visit us and make sure to tag us in your pictures. WE SEE YOU!”

Rudy’s opened last year on November 1 to celebrate World Vegan Day. On its first day, it sold out of all its products and attracted long queues down the street.

The company has since said its staff had been working through the night to meet ‘overwhelming’ demand. It also moved into a new ‘state of the art kitchen’ to increase its capacity and keep up with orders.

While the shop has so far proved a roaring success, its announcement stirred controversy among meat-eaters.

Among them was vegan-baiting TV host Piers Morgan. He wrote on Twitter: “A vegan butcher’s shop… and people wonder why I’ve written a book about the world going nuts.”

Debate raged online over whether or not a butcher’s shop can be vegan, but many were in support of the upcoming shop. One user wrote: “The world going nuts is the reason for a shop like this. Plant food is the future otherwise we won’t have a future at all. Simple really.”