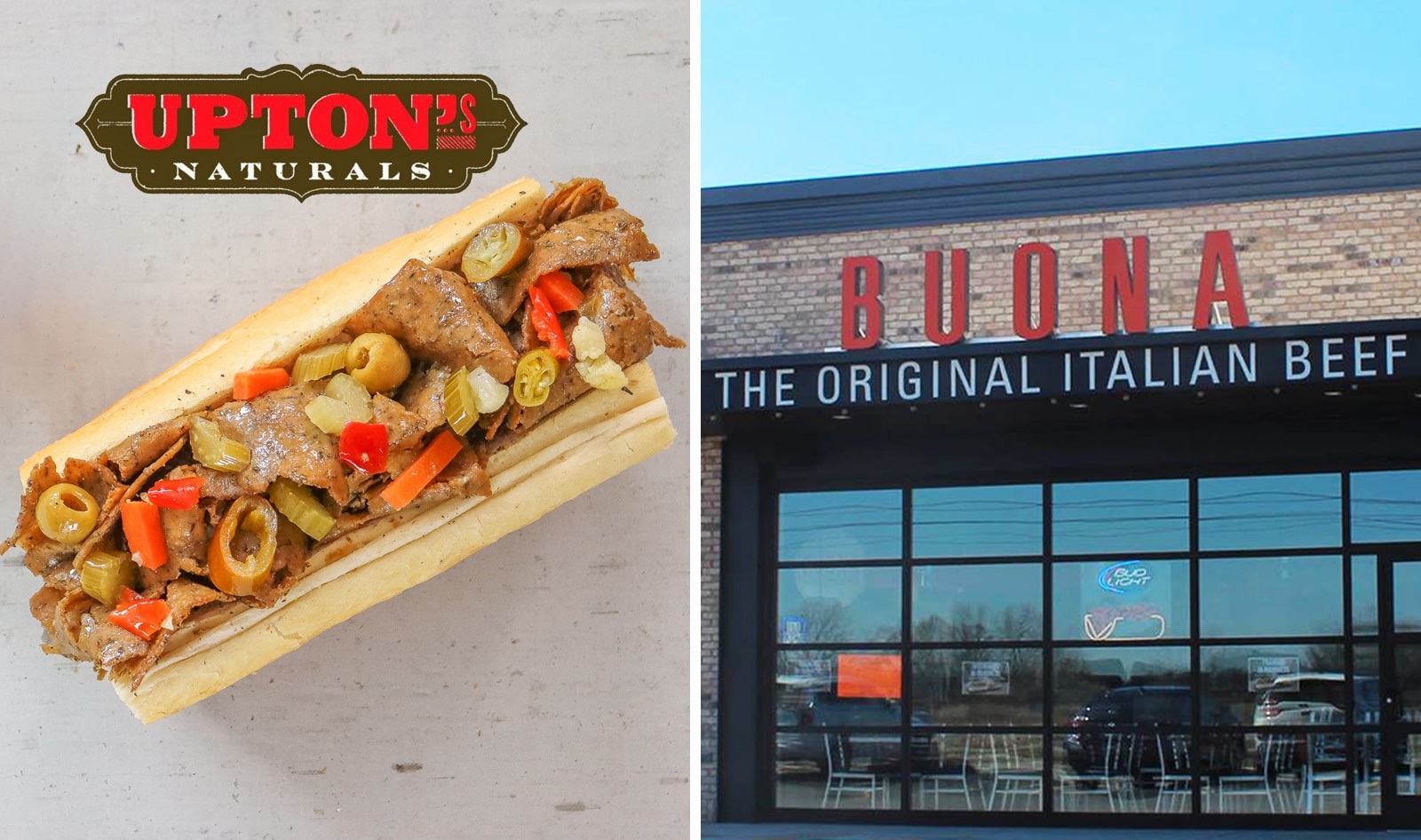 This week, The Buona Companies (parent company of restaurant chain Buona) launched a vegan version of its Original Italian Beef sandwich. Bouna partnered with Chicago-based vegan brand Upton’s Naturals to craft the seitan-based vegan beef for its new Plant-Based Italian Beefless Sandwich which features a choice of hot or mild giardiniera and is served on French bread. The vegan beef sandwich is paired with a vegan gravy Buona created exclusively for the launch from vegetable broth, Buona’s Italian spices, and olive oil.

“While Buona is known for our Original Italian Beef, we wanted to expand our plant-based menu options to serve the growing number of vegans and vegetarians who join their families at our restaurants. We wanted something that felt true to our establishments, menu offering, and family recipes, which is why we decided to use our signature dish as inspiration,” Candice Jordan, director of marketing at Buona, said. “We all felt Upton’s Naturals was the best fit as a partner. We wanted the sandwich to be all natural like our original Buona Beef and being local was the gravy on top. We’re excited to be one of the first multi-unit restaurants able to offer an authentic plant-based Italian ‘beefless’ sandwich.”

The sandwich will be on the menu at Buona’s 24 locations and retails for $7.99. Buona is preparing the vegan sandwich separately from non-vegan products to ensure that there is no cross contamination.

Buona chose to use Upton’s Naturals’ seitan for the new vegan beef sandwich due to the vegan meat’s ability to absorb flavor while maintaining a beef-like texture. While there are vegan options galore in Chicago, Buona’s new options makes it possible for plant-based eaters to sample Chicago’s most iconic sandwich.

“When vegans go out to eat, they crave the same variety and savory meal options as anyone, just without the meat to go with it,” Upton’s Naturals Founder Dan Staackmann said. “There’s so much opportunity to serve the community of people embracing a plant-based diet, which stretches far beyond having a vegan burger on the menu. The Buona Beef family understands that, and with our slices of seitan, we’re so happy to be able to support them bringing a 100-percent vegan take on the traditional Italian beef sandwich to Chicago.”

While Buona is only offering the new Plant-Based Italian Beefless sandwich through the summer of 2021 (for now), the new vegan option has already proved popular and sold out at several locations before 12:30 pm on launch day. After one day on the menu, Buona sold more than 1,800 pounds of vegan beef and placed a double order of Upton’s Naturals’ seitan to fulfill demand.

“Our goal for 2021 was to explore more plant based options on our menu overall,” Jordan told VegNews. “We are definitely exploring adding this item to our full time menu as well as other vegan sides. We are focused on learning from the vegans/vegetarians feedback and welcoming everyone to have a seat at our establishments, no matter if you eat meat or not.”