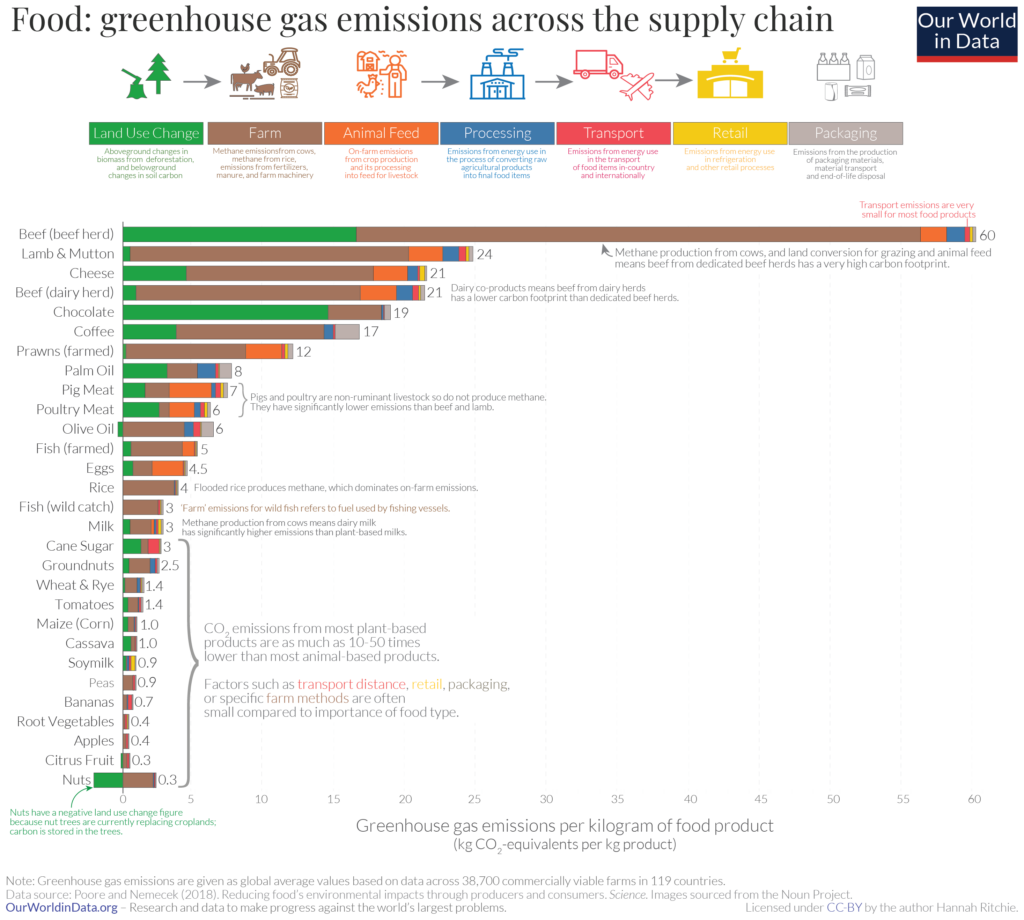 Many UK citizens are yet to make the connection between meat and dairy production and emissions, new YouGov research has indicated.

In a recent poll, commissioned by research firm Social Change Lab, individuals were asked to look at seven methods for reducing animal agriculture-related emissions. They were instructed to select what they identified as the two most effective, if spearheaded by the UK government.

The top choices were revealed to be eating locally sourced animal products (with 41 percent of the vote). And, offering farmers financial support to move toward organic farming.

Encouraging a shift towards plant-based diets was the fifth-most popular answer. It garnered just 12 percent of the vote.

The findings suggest that the UK public does not understand the extent of animal farming’s impact on the climate. This is despite 50 percent claiming to be “somewhat clear” on what they can do to fight the climate crisis. In addition, 15 percent identified themselves as being “very clear.”

“It seems that the meat and dairy industry has successfully duped the public into thinking that eating local is the best thing to do for your carbon emissions,” James Ozden, founder of Social Change Lab, told Plant Based News.

“However, research shows this is far from the case. Eliminating meat and dairy products is the best way to reduce your food-related emissions.”

Is eating local meat better for the environment?

The largest ever analysis of food systems came in 2018. Scientists Joseph Poore and Thomas Nemecek amassed data from 38,000 commercial animal farms in 119 countries.

Our World in Data created an infographic to highlight their breakdown of how greenhouse gas emissions are calculated across 29 food groups.

Beef, as the largest generator of food-based emissions, sits at the top of the chart. It is followed by a further three animal products. All four show transportation emissions as being a small percentage (10-20 percent) of the total generated. Conversely, farming practices comprise the vast majority.

It is estimated that a minimum of 14.5 percent of all greenhouse gas emissions are a result of animal agriculture. This is, in part, due to the increasing scale of industrial farming operations. “Mega farms” have resulted in a world cattle population of around one billion alone. Notably, each individual animal is able to belch 220 pounds of methane into the atmosphere.

Cutting down on meat and dairy consumption is considered a positive step towards emissions reductions. However, switching to a more plant-based food system has been regarded as the best course of action to avoid total climate breakdown.

Despite nine percent of the country identifying as vegan or vegetarian and a further 23 percent using the flexitarian tag, UK consumers appear largely unsupportive of potential governmental plant-based initiatives.

Approximately 14 percent of people polled by YouPoll considered offering farmers financial aid to move to plant-based farming as a suitable priority. This was then followed by 12 percent wanting to see the government encouraging citizens to eat a meat-free diet. Finally, 11 percent considered redirecting farming subsidies to farmers who are not rearing animals as a viable option.

The only course of action to gain less support than plant-based initiatives was telling people to replace beef with chicken.

Ozden tweeted his relief at the latter.

“Luckily, the UK public also doesn’t think we should switch from eating beef to eating chicken. Whilst potentially better for the climate, this would involve many more animals to be killed, which would be terrible for animal welfare. One cow produces as much meat as ≈300 chickens,” he said.

The UK government is considered by many, including its own food tsar Henry Dimbleby and the Climate Change Committee (CCC), to be falling short of its mandate to reduce food-related emissions. In a report published in June, the CCC shows that there is no tangible plan in place to reduce greenhouse gas emissions from the farming sector.

The post UK Public Thinks Eating ‘Local Meat’ Will Save The Planet, Survey Finds – Here’s What The Data Says appeared first on Plant Based News.