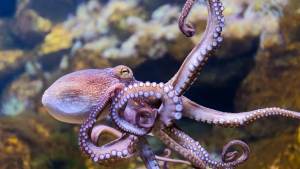 Crabs, lobsters, and octopuses are now recognized as sentient beings in the UK. The decision, part of the British government’s post-Brexit changes, could help shape future animal protection legislation.

Last week, the UK government announced it had added cephalopod molluscs (squids and octopuses, for example) and decapod crustaceans (crabs, lobsters, and shrimp, among others) to its Animal Welfare (Sentience) Bill.

Up until now, the bill formally recognized vertebrates – any animal who has a backbone – as sentient beings who “experience feelings in the same way humans do,” Animal Welfare Minister Lord Zac Goldsmith explained in May.

However, despite not having a backbone, decapod crustaceans and cephalopods have complex central nervous systems. This is one of the “key hallmarks of sentience,” the UK government website says.

The update came about after the London School of Economics and Political Science (LSE) published its government-commissioned independent review.

The LSE reviewed more than 300 studies and found “strong scientific evidence” to support claims of sentience.

The report outlines specific recommendations for commercial practices. For instance, it advises against declawing (removing one or both claws of a crab) and nicking (cutting the tendon of a crab’s claw).

Researchers recommended a ban on the sale of live decapod crustaceans to untrained, non-expert handlers.

They also recommended a ban on specific forms of decapod slaughter, such as boiling them alive, raising the temperature of water, and dismemberment of any kind.

The bill reform is intended to help guide future policies, so it will not affect existing legislation or industry practices like fishing. It will also not interfere with the shellfish catching or restaurant industries.

‘It is only right’

Speaking about the updated bill, Animal Welfare Minister Goldsmith said: “The UK has always led the way on animal welfare and our Action Plan for Animal Welfare goes even further by setting out our plans to bring in some of the strongest protections in the world for pets, livestock and wild animals.

“The Animal Welfare Sentience Bill provides a crucial assurance that animal wellbeing is rightly considered when developing new laws. The science is now clear that decapods and cephalopods can feel pain and therefore it is only right they are covered by this vital piece of legislation.”

Once the bill becomes law, an Animal Sentience Committee will be established. The committee’s experts will monitor the government’s consideration of sentience in future legislation, and assemble reports about how well these guidelines are met.

The post UK Government Recognizes Octopuses, Lobsters, And Crabs Have ‘Feelings’ Like Humans appeared first on Plant Based News.