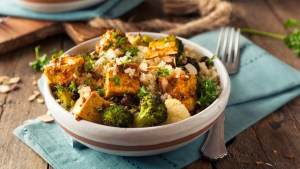 A rapidly growing food and recipe platform, known as MOB, has launched a vegan-specific hub for those who want to eat more plant-based food.

Foodies flocked to the new VeganMob platform, which gained 50,000 followers on Instagram within two days of launching.

Founder of MOB and VeganMob, Ben Lebus said: “There was a massive appetite for vegan recipes and content on our existing platform. Whenever we put up a vegan recipe, the take-up and enthusiasm around it was patently clear.”

As someone who was raised around food, his dad owned an Italian restaurant, Lebus was always a foodie and wanted to help his friends cook good food on a budget.

He launched MOB with 20 simple recipe videos. The platform now has over 1.5 million followers across its website, TikTok and Instagram and employs 32 full-time staff.

With an audience in their 20s and 30s, who showed a growing appetite for eating less meat without sacrificing on flavor, the MOB team created VeganMob.

Lebus told Plant Based News, he hopes VeganMob will become, “a home for great, affordable and accessible vegan recipe ideas.”

It’s not just popular with vegans

Not long after launching on Instagram, the VeganMob team set up a poll to find out how many of their then 10,000 followers were vegan.

The poll showed that 23 percent of followers were vegan and 77 percent wanted to eat more vegan food.

This is supported by data from a 2019 survey that showed plant-based meal occasions were on the rise in the UK. And it’s not necessarily vegans who are consuming them.

The survey by Kantar consulting showed that 92 percent of plant-based meals were eaten by non-vegan people.

Recipes on the VeganMob platform include mouth-watering pasta, falafel burgers, and lentil meatballs, as well as more adventurous meals.

For plant-based foodies, who’re out to impress friends and family, there are dishes like spicy roasted cauliflower with hummus and pickles and scotch bonnet coconut and crispy tofu noodles.

Lebus told PBN the next stage for the platform is a rebranding, which will take place over the coming months.

VeganMob is working with a creative agency to develop a new look and will be hiring vegan chefs to create many more simple, delicious, and affordable recipes to meet the demand led by its followers.