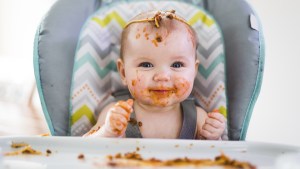 Australian journalist and television host Caleb Bond has chastised parents raising their young children on a plant-based diet. In a Sky News segment, Bond accused a mother of “bragging” about raising her baby vegan, which Bond says is “truly disturbing.”

Bond references a video uploaded to TikTok by mother Tasj Rose, who is filmed holding her baby. The video’s caption reads: “You’re not really going to raise her vegan are you?” Rose nods and lip syncs a song’s lyrics: “Yes I am, yes I am, yes I am.”

Bond commented: “If you want to go vegan that’s your business. But if you are so broken in the head as to force your baby into veganism, that is pure child abuse.”

The TikTok video divided commenters, with one user calling the the decision “selfish.” Others applauded the mother and her “very healthy” baby.

Another commenter noted that the decision to make a child vegan is no different to “forcing them to eat meat.”

During the Sky News segment, titled “Woke Madness,” Bond said: Enforcing a vegetarian diet on your child is one thing, I mean you can get essential vitamins and minerals like calcium and iron and vitamin B12 from dairy and eggs.

“But it’s virtually impossible to give small children the vitamins and minerals they need on a vegan diet,” such as B12, Bond said.

“And not enough B12 causes nerve damage,” the presenter added.

“Vegan diets are also low on fats and iodine which are vital for babies growth and mental development respectively,” Bond continued. “A Polish study last year found that vegan children were, on average, three centimeters shorter, had four to six percent lower bone mineral content, and were more than three times more likely to be deficient in vitamin B12.”

The findings – particularly the claim that vegan children are shorter – made headlines last year with media outlets warning that animal-free diets result in “smaller and weaker bones.”

Dr. Justine Butler – a senior health researcher for charity Viva!, and holder of a PhD in molecular biology – spoke to Plant Based News (PBN) about the claims.

“The supplementary material in this study revealed that the vegan children’s height fell within the normal range for their age. Suggesting that they were abnormally short is misleading, it could just as easily be argued that the meat-eaters were abnormally taller,” Butler wrote to PBN.

“Babies fed cow’s milk-based formula grow faster than breastfeeding infants and the vegans in this study were less likely to have been given formula. It could also be that children eating meat and dairy grow faster initially but that it evens out at adulthood. We are not aware of any adult studies showing that lifelong vegans are shorter,” Butler said.

B12, cholesterol, and protein

The study’s results surrounding B12 levels are also more complicated than Bond suggests.

Nearly a third of vegans in the study were not consuming B12-fortified foods (such as some plant-based meats, cereals, and milks) or supplements. And the vegan children who were had healthier B12 levels than the meat-eating participants.

“In the UK and the US, vitamin B12 deficiency affects around six percent of people under 60” regardless of diet, Butler highlights. “For people over 60, this rises to around 20 percent. Getting into the habit of taking B12 at an early age is vital.”

The researchers also found that the vegan children had lower levels of body fat than non-vegan kids. Moreover, they had 25 percent lower levels of LDL cholesterol. Butler notes that high levels of cholesterol can increase the risk of stroke and heart disease.

Further, compared to the meat-eaters, the vegan participants’ protein intake was closer to the recommended amount for their age.

On average, plant-based kids consumed 42 grams of protein a day, compared to the meat-eaters’ average of 57 grams. This is nearly double the recommended amount for this age group (20-30 grams a day). Excessive protein intake, especially from animal sources, can damage the kidneys, liver, and bones, Butler says. It can also raise the risk of some cancers.

The meat-eating children involved in the study also consumed too much saturated fat and sugar, but inadequate amounts of carbohydrates and fiber.

Are vegan diets safe for kids?

During the TV segment, Bond pointed to a 2019 case whereby a couple was charged with manslaughter after their toddler died from thirst and starvation.

The 18-month-old child tragically passed away after not consuming any solid foods for a week, and was instead being breastfed. Prior to that, the toddler had only consumed raw fruit and vegetables.

The couple were also charged with extreme neglect due to their treatment of their other children (aged three, five, and 11 at the time). All the children were found malnourished, with one child having blackened teeth that had to be removed.

Bond referenced the case as an argument against plant-based diets. However, the toddler’s tragic death was ascribed to malnutrition and complications, including dehydration and microsteatosis of the liver, with no specific mention of veganism.

Further, the toddler, who was home-birthed, had never seen a doctor. This is despite the fact that he had allegedly been unwell for six months.

There is currently no data available that compares the instances of malnutrition among vegan and non-vegan children, making it difficult to determine if plant-based foods are to blame.

Butler maintains that a vegan diet is safe for young children if it is managed properly.

“All major health bodies agree that appropriately planned vegan diets are healthy, nutritionally adequate, and can provide health benefits for everyone, including children,” Butler wrote to PBN.

In fact, health reasons are the key motivator for the growing number of families choosing to raise their children on a plant-based diet.

Like all diets, parents must ensure their children are consuming enough calories and nutrients. Those interested can read Viva!’s Thriving Vegan Children guide for more information.

The post TV Presenter Calls Mother Raising Her Baby Vegan ‘Disturbing’ And ‘Broken In The Head’ appeared first on Plant Based News.