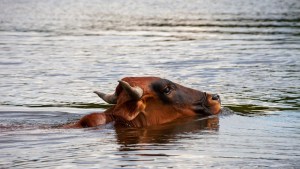 Thousands of animals have died after severe flooding and mudslides hit farmlands in southern British Columbia (BC), Canada, this week. One person lost their life, and the death toll is expected to rise further.

The government declared a state of emergency as a month’s worth of rain came down in two days. Public safety minister Mike Farnworth named it “an absolutely unprecedented, torrential deluge like we’ve never seen before.”

Hundreds of farms were hit, especially in Fraser Valley. This includes Abbotsford, where around half of BC’s dairy farms are situated.

“Many more” animals are still stranded and at risk, the Ministry of Agriculture said, and assured that the government is working to send veterinarians their way.

Agriculture Minister Lana Popham spoke about the tragedy in a news conference, dubbing it “heartbreaking” and an “agricultural disaster.”

“It is a very difficult time for our producers … I can also tell you that many farmers attempted to move animals and then had to walk away, because the roads were disappearing beneath them,” Popham said.

“The animals that are getting moved through those water flows have been able to make it to a safe spot, but to tell you the truth, they’re not in good shape when they get there.”

Hundreds of farmers ignored evacuation orders because they didn’t want to desert their animals, Abbotsford Mayor Henry Braun said in a statement. This is despite the fact that most of the animals affected were being raised for slaughter.

“Many would give their lives for their animals,” Braun said.

Later, more than 180 of those who stayed behind had to be rescued as waters kept rising.

Dairy farmers have been unable to deliver their products, spurring the BC Milk Marketing Board to advise that they dump the milk into manure piles.

Premier John Horgan warned that the event is signalling what is yet to come. “While Environment Canada called this a one-in-100 year event, we know the increased likelihood of intense storms is due to the climate crisis,” he said, per The Guardian.

The post Thousands Of Farm Animals Die During Catastrophic Flooding In Canada appeared first on Plant Based News.