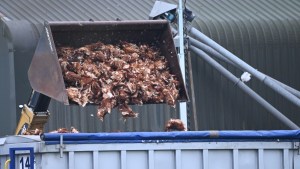 The ongoing bird flu “crisis” in the UK has recorded further turmoil this week.

This is after footage recorded the disposal of thousands of dead chickens at an “intensive” facility in Lincolnshire which supplies eggs to major supermarkets including Aldi, Sainsbury’s, and Morrisons.

Animal welfare campaigners are calling for the UK government to ban factory farming in its wake, as it claims the conditions mean diseases spread “like wildfire.”

Open Cages, an animal protection charity, obtained the footage at Ivy House Farm in Alford. The company which owns it is LJ Fairburn. Here, it produces and packs a staggering 17 million eggs a week for the consumption of British shoppers.

In disturbing scenes, the footage shows thousands of dead chickens as they loaded and removed from the premises following an outbreak of bird flu. According to Open Cages, they will likely be gassed to death.

Alarmingly, the organization maintains, wheelbarrows of dead birds were left in the open air. This is despite bird viruses being present in air samples more than 100 miles from infected farms.

Moreover, the farm declared its outbreak on December 11. And, according to the footage, was actively culling birds up until December 22.

“These images should shock us more than they do,” protests Open Cages CEO Connor Jackson.

“Bird flu was once a very rare disease among chickens, but today there are outbreaks occurring every year: this footage helps explain why.

“When you take tens of thousands of chronically stressed animals and cram them into a filthy indoor facility you create an ideal environment for disease.

“The more the animals suffer, the more stressed they become, and the less their immune systems can cope. Deadly diseases like bird flu can then emerge easily or give foreign strains the perfect breeding ground,” he adds.

Tragically, these chickens are just a small number when compared to the millions who have already perished as a result of the avian influenza sweeping the nation.

This is because the UK is currently witnessing the “largest-ever” outbreak of the H5N1 strain of bird flu. It’s prompted government officials to install stringent biodiversity measures across British farms.

Infected animals include chickens, turkeys, pheasants, ducks, and even swans.

The picture remains grave in other countries too. This follows the news that 5,000 cranes and half a million chickens were ordered to be killed in Israel.