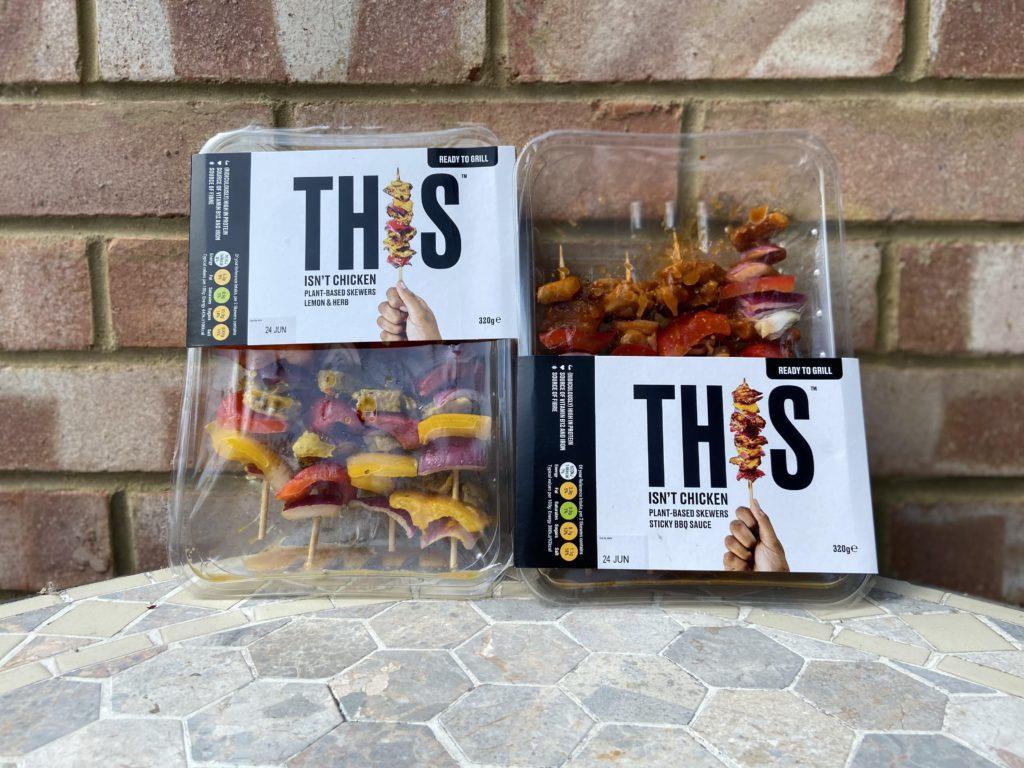 We reviewed THIS Isn’t Chicken Skewers in its two flavours, Sticky BBQ and Lemon and Herb, for flavour and texture. Here’s what we thought. Ever since it broke crowdfunding website Seedrs’s record for the fastest company to hit a target over £1.5 million, plant-based meat brand THIS has been making tremendous strides in the UK’s vegan market. Striking new deals with restaurants like Prezzo, overtaking conventional chicken at Barburrito and launching a host of new products, THIS has been making tremendous strides. Its latest launch comes right at the peak of summer, as households take out their barbecues and get the grill going. THIS Isn’t Chicken Skewers come in two flavours: Sticky BBQ and Lemon and Herb (which the brand says is inspired by “that Portuguese chicken restaurant“). The brand aims to disrupt the usually meat-heavy BBQ season with its new offerings, which come in 320g packs complete with four wooden skewers stacked with vegan chicken and vegetables. We reviewed THIS Isn’t Chicken Skewers on a barbecue, and here’s what we thought.

If you’re developing chicken skewers, your first flavour has to be a sticky barbecue sauce. It’s a given. This comes with marinated pieces of THIS Isn’t Chicken, red peppers and onions. The colour after cooking is incredible. The texture of the chicken is brilliant — it’s crispy on the outside and but juicy and soft on the inside. The smokiness from the barbecue really elevates all the flavours, particularly for the peppers and onions, which don’t soak up much of the marinade. The plant-based chicken itself doesn’t absorb all the flavours, but the ones it does are wonderful. The sauce is smoky due to the barbecue but also the smoked bittersweet paprika added in. It has hints of sweetness that add some wonderful depth to the whole dish. But the overall flavour isn’t as strong as one would like; the marinade needs to do a better job of seeping its flavour into the vegan chicken and vegetables. As an Indian, I’ve grown up eating kebabs made on tandoors, and this is very reminiscent of the real thing. 4/5

Straight off, the aromas these are giving off are spectacular. This is immensely fragrant, and the freshness of the lemon shines through. On tasting, the consistency of the chicken was fantastic again. Flavour-wise, while the smoke really took it up a notch with the Sticky BBQ, the Lemon and Herb doesn’t need it much. It’s delicious and refreshing on its own. It’s not quite as herby as you’re promised, but it is definitely lemon-forward in all the wonderful ways. Curiously, while the Sticky BBQ only had red peppers, this variant of THIS Isn’t Chicken Skewers has both red and yellow, perhaps to add the bright colour contrast one associates with lemons and their citrusy flavour. Again, however, the vegetables don’t absorb the marinade as well as the vegan chicken. But then again, the chicken is the star of the dish. Unlike the Sticky BBQ, the Lemon and Herb chicken skewers have a much more prominent flavour coming through from the marinade. 4.5/5

Read our review of THIS Isn’t Bacon Lardons.

While it’s understandable that vegetables aren’t great sponges when compared to proteins, a good kebab will always lend some flavour to the vegetables as well. In both these products, the onions and peppers were largely devoid of the marinade’s flavours, which meant the chicken needed to most of the heavy lifting. The smokiness is on point and does wonders to both flavours, in different intensities. The Sticky BBQ could do with a more flavour-packed marinade that the components of the skewer can absorb better, and the Lemon and Herb would have proved even more delicious had the notes of the herbs been more prominent. But even with these minute details that could do with some improvement, the overall product is a hit. It will light up vegan barbecues and can truly create its own space in the summer market. And so, THIS Isn’t Chicken Skewers have our stamp of approval. Each pack costs £3.50, which, when compared to conventional counterparts, is quite pricey. But it’s 2021 and paying a slightly higher premium on plant-based meat alternatives is almost inevitable, even if that’s slowly changing. With THIS, however, you get what you pay for. THIS Isn’t Chicken Skewers are available at Tesco for £3.50 per 320g pack, in both Sticky BBQ and Lemon and Herb flavours. The post THIS Isn’t Chicken Skewers review: vegan BBQ gets a makeover appeared first on The Vegan Review. plant-based nasdaq-bynd meat chicken